Is reggae in Chad running out of breath? 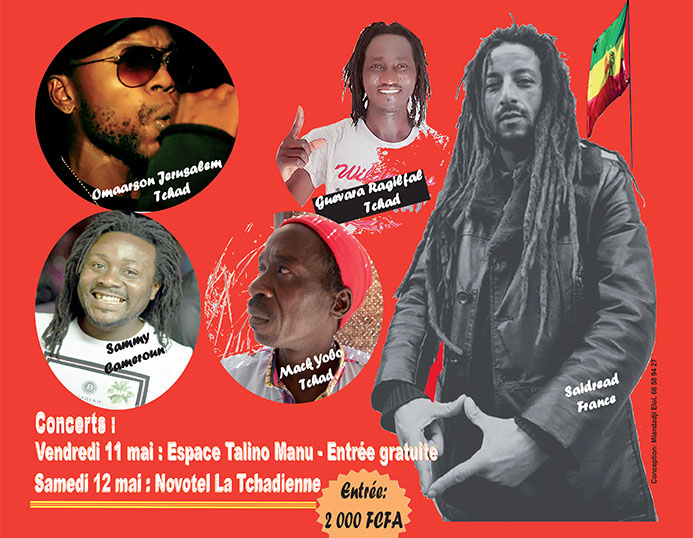 Just like hip-hop, reggae arrived in the Chadian landscape in the 1980s. The deceased such as Jah the Red, Popaul made a name for themselves in N’Djamena with this trend. Over time, a new generation of artists with a vocation for reggae was born. Like the fire of straw, very quickly, this generation is running out of steam; this tendency tends to disappear little by little.

It was in the 1960s that the rise of reggae was confirmed with the resistance movement against imperialism. Reggae, a protest and fighting music, born in Kingston, Jamaica, has thus conquered the world and acquired an emblematic Rastafarian character, but its fundamental nature remains unknown, not only in Chad, but all over the world. Reggae goes hand in hand with Rastafarianism, a core of spiritual resistance advocating a return to an African identity, which has been a determining factor for music. However, at the beginning of decolonization in the 1960s, it developed in the Kingston ghettos, inspired by the poignant rhythms of African and Afro-Cuban music.

Unlike hip-hop, which has long established itself and slam, which has made its way into Chad in recent years, with which we can clearly see the enthusiasm of young Chadians, reggae, with its rich history, is gradually being lost in our country, leaving its intrinsic values behind it, since the movement is fed by combat. And all this at a time when Chad needs it most, with the widespread social crisis in Chad. There is almost no enthusiasm for this trend. But why? “It’s true that reggae is on the decline right now, but the causes are many. There are prejudices about reggaemans because of the “strange” hair they wear. In Chad, we equate all those who wear locks with drug addicts, with madmen. In all this Chadian is what it is… But what more can we say?” justifies the Chadian reggaeman Guevara Radjil Fall, who is also the artistic director of the Afro’on festival on N’Djam, the very first reggae event that took place in May 2018 in the Chadian capital. Censorship is the norm in Chad when it comes to freedom of expression, and reggae is no exception to this rule because of the virulence of the texts. Radio stations do not play committed music, especially national radio. This censorship has led to self-censorship by the artists themselves who, forced to make a living from their art, change their guns.

Despite all this, it should be remembered that reggae is a protest music, its birth in Chad coincided with the arrival of the repressive regime of President Habré at that time. A time when you don’t have the right to speak. The climate of terror that prevailed during this period did not allow reggae to grow. “But there is also a significant factor that is language. The lyrics of reggae music are 95% in English, but Chad is French-speaking, difficult for this trend to establish itself,” Guevara says.

To date, there are very few reggaemans in the musical sphere in Chad. The only one who plays, a few rare times right now in Chad, is Placid Ayrée. For Placid, reggae is a breath of life. The man drowns fully, spiritually in reggae, having even had a baptism of the Rastafarian movement in Ghana, hence the name Irie, very poorly pronounced in Chad so he simplifies it “Ayrée”.

In addition to “Irie”, there are artists such as Guevara Radjil Fall, Num Zion, Jah Love, Sammy and the Palmio brothers, Aimée and Ndem. Not to mention Achille Balda, currently in the United States, known at the beginning as Achille Alpha (in honour of Alpha Blondy), who was well known and present on the music scene in Chad for a long time. Apart from these, there are also a few artists who flirt with reggae, like Omarson Jerusalem who navigates between reggae and rap, Did’s Mtato between reggae and other trends…

The Afro’on sur N’Djam festival is to date the only festival that promotes the advancement of reggae, i.e. beyond May 11, which commemorates the death of reggae icon Bob Marley. Reggae, if we must remember it, is more than music, but rather a state of mind, a way of life deeply opposed to violence.