Bankass and Douentza: When the water problem undermines the resilience of non-displaced populations 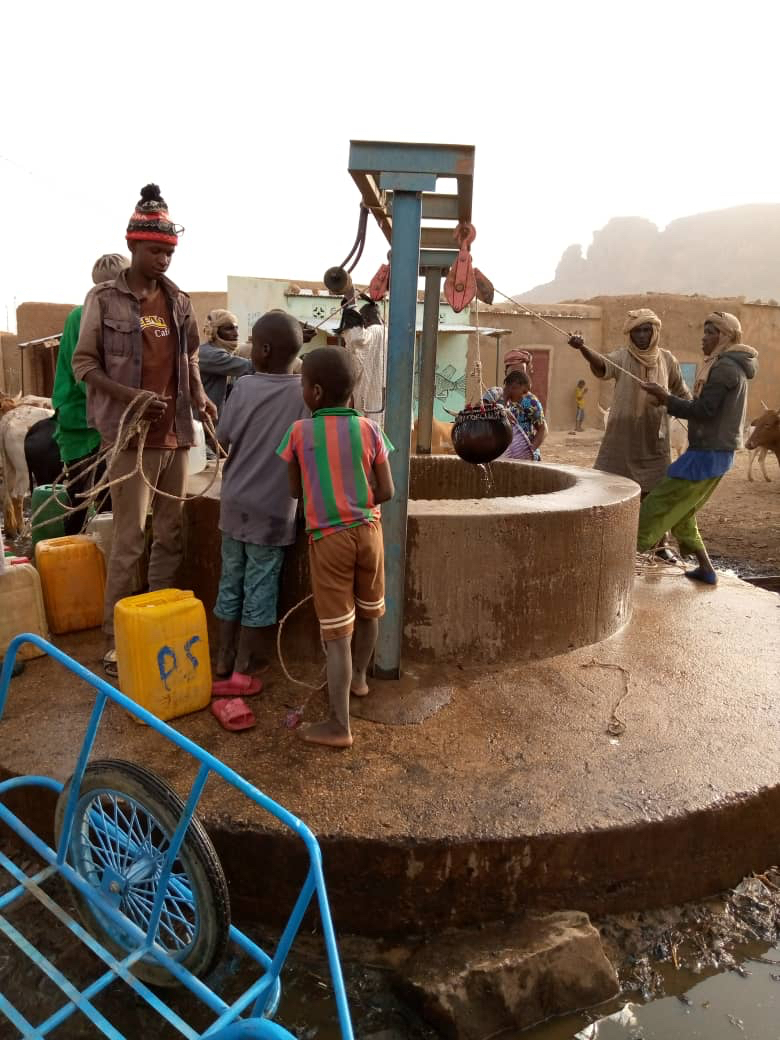 En puits à Boni, Douentza. © Voice4Thought This article is a machine translation from French. Click ‘Français’ in the menu to read the original text.

As a result of research in our areas of intervention, many communes in the Douentza and Bankass circles are subject to water shortage problems.

Since 2015, the populations of the Seno area, the plain and the cliffs which include the circles of Bankass, Bandiagara, Douentza and Koro are in the grip of instability due to attacks caused by inter-ethnic crisis. This instability has led to the displacement of people from all sides, with villages completely decimated and families dispersed

In May 2019, the youth union of this area called the Collective of Youth Associations of the Dogon Country (CAJPD) warned about the disruption of the wintering period of the last three years in 42 Communes of the area with displaced people spread over 46 communes. At the time, the collective mentioned 860 water points that are no longer functional in the circles of Bandiagara, Bankass, Douentza and Koro. With the evolution of the insecurity situation, these figures are only increasing, further weakening the resilience of the population. This applies not only to the problem of drinking water, but also to water used for socio-economic activities. Water plays an important role in agriculture, one of the main activities of these localities.

Thus in Bankass as in Douentza, the young people of Voice4Thought Academy (V4TA) were able to learn about certain realities related to water problems in the villages.

As in many terroirs in Mali, the economic activity of these terroirs is based on agriculture, breeding and trade. After harvest time, the mainly female populations practice gardening. While the rainfall situation is characterized by the rapid drying up of water. “« Puring the winter months, we are faced with insufficient rainfall, locust attacks and insect infestations. After the rainy season, we do gardening in order to earn enough money to help ourselves and provide for our needsThe project has been a great success,” explain Issa and Fatouma TOGO, farmers and gardeners at Bankass. Farmers in these areas justify gardening by the fact that they are very often confronted with food shortages. « To get by, after the rainy season, instead of standing there with my hands folded, I do some gardening.. “, is justified, Amadou LOUGUE, a farmer in Bankass

Unfortunately, these gardeners are facing difficulties, including insufficient water, which prevents them from watering their gardens better

However, places with public water fountains seem to be out of business Due to the fact they are obliged to use water from them and pay the bill at the end of the month. According to Amadou S TOGO, in Kani Bozon, there are castles but the quantity of water is insufficient for the population

The situation becomes even more alarming when it comes to remote villages. Thus in Sabloulo, a small village in the commune of Koubel Koundia in the circle of Douentza « Our great difficulty, and not the least, is water. We have no water. We don’t have a pump or a well and our only source of water is the marigot which will soon dry up and hello the difficulties of life until the winter …we are poor and besides being in a small village in a remote commune, the authorities don’t care about their people, about us… “, complains Aissata.T, married and mother of 6 children

According to Sidiki LOUGUE, a farmer in Dimbal in the Bankass circle, population growth as well as the migration of the displaced would be the major factor in the lack of water, which continues to increase every day in his locality.

It is very urgent that the competent authorities make the issue of waters a priority in these areas. « We are asking for the support of NGOs to reduce this problem a little bit of water,” asks Yessa TOGO, a resident of Kani Bozon commune.

This water problem is not only for these areas mentioned, several other localities, including our intervention sites Macina and Bougouni will be the subject of our next editions.