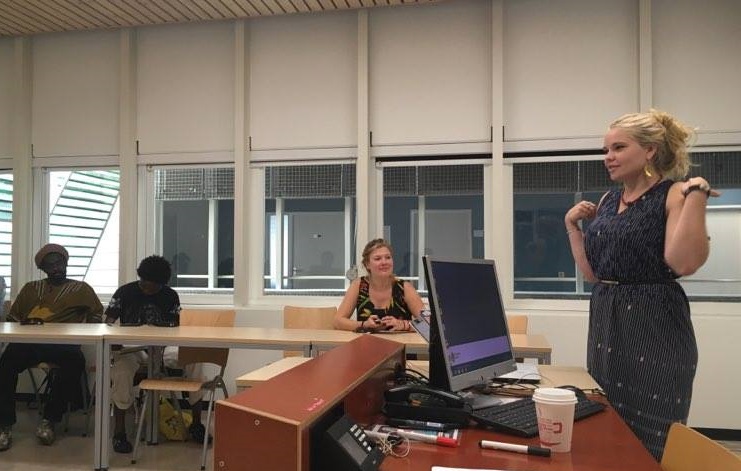 On Saturday Voice4Thought hosted a blogger workshop. Slowly but surely people started to drop in – some a bit hungover from the concert from the day before – and around 11.30 we were all set to get started!

Because of safety reasons for some of the participants I will not share their names. However, safety issues are exactly one of the reasons why we hosted a blogger workshop in the first place. For many activists in the world that protest, write, criticize and kick people in power in the face, physical and psychological torture, threats and violence are something that is rather more common than non-existent. Even though some of them fled their countries because of fear for their lives, they continue to fight for freedom of expression, the respect for human rights and for giving people the information they deserve to make a well-informed decision about, for example, elections and who to vote for.

It is with a group of awesome and dedicated people that we had a day full of empowerment, learning from and sharing with each other. After the round of introductions, Abel Maina, a Chadian political activist and journalist in exile in France, gave a presentation about his website “Yadari.fr”. This website, which was born only two months ago, gives Chadian people, and anybody interested in news from Chad and other Francophone African countries, news from its HQ in France. Yadari, which somewhat translates into “Oooh my country [hurts…]” in Chadian Arabic, was born from the need to create a network of citizen journalists, mainly in Chad, that report, analyze, and if needed criticize social and political issues in Chad and Francophone Africa. Moreover, they wanted to tell the stories that were normally seen as taboo, and hence not talked about.

Maina spoke about the importance of always making sure to double (or triple) check the stories that you hear from the ground. If somebody had made a video of soldiers doing something wrong, you always need to verify where the video was made, by whom, and who was doing something wrong. By doing so, they (Yadari) can never be accused of not telling the truth.
Another issue that Maina highlighted was the importance of social networks, and mainly Facebook, to talk about and showcase the taboos. He told a story of a girl that was abused by soldiers in Chad. Somebody had made a video of this and send it to him. Instead of writing about it, he showed the video on his public Facebook page. People were in SHOCK. Screaming (virtually) that this was unacceptable and he had to delete it because it was unethical. But especially this reaction is what he wanted to instigate. Showing the unseen, writing about the untold.
Not only Maina’s Facebook page and Yadari are places where our bloggers tell the untold. Every single participant shares stories of the untold and the unseen. Our friend from Kenya keeps on telling his story about his murdered brother (because of his political actions), and instead of backing out he continues and steps out in the open.

After Maina’s talk we highlighted some issues that our bloggers have encountered, and especially how they deal with difficulties. One of the most interesting discussions resulted from the question: for who do you write?
Most of them could answer the question of WHY they write: because of passion, because they don’t like to talk (and thus draw cartoons), or because they feel like stories need to be told. Some of our bloggers also noted that, when he fled his country because of threats from the government, he had nobody to talk to. He felt alone, and therefore Internet gave him a place to write away his fears, anger and find likeminded people. It was his only support system in a difficult time. Somebody else mentioned she wrote for the creating of understanding, others mentioned they wrote for the support of each other and to help the voiceless get a voice.
However, we got stuck on the question of for WHO they write. Translations in language and with words are often difficult because people will or may interpret it differently that how you had meant it. Catherina, a researcher from the Connecting in Times of Duress research team from Leiden University, added a nice dimension to the discussion by telling her story that she does research with people from Congo DRC and the Central African Republic, while she does research with them in French, she writes their stories in English. But her question still is: for who am I writing their stories? For them? For me?
Our cartoonists from Chad eventually came with a nice solution: from a drawing you can at least see if an event was sad, happy, or if it is sarcastic. No need for translating into English or French, or even for those who are analphabetic.

After lunch, I gave a small step-by-step workshop on how to use Search Engine Optimization (SEO). In other words: how to make sure that Google is your friend. For many this small workshop seemed like a “I already know how to put my article online” – however, while I was explaining the simple steps, people started realizing that while applying 5 simple steps when making your website and editing and posting your articles, you can help Google like you, which creates more visibility! Increasing the chance that people will read your story is just as important as writing it.

After the small SEO workshop we did another round of questions, which led to making sure we were all on the same page, and we will together develop a network of bloggers who all support the same thing: respect of human rights and the freedom of expression!
If you are interested in joining our network and/or if you are a blogger yourself and you want to share your story – please don’t hesitate to contact me!
Nous sommes ensemble!

Samy Daina was there, ready to portray the moments of this blogger workshop with his pen!