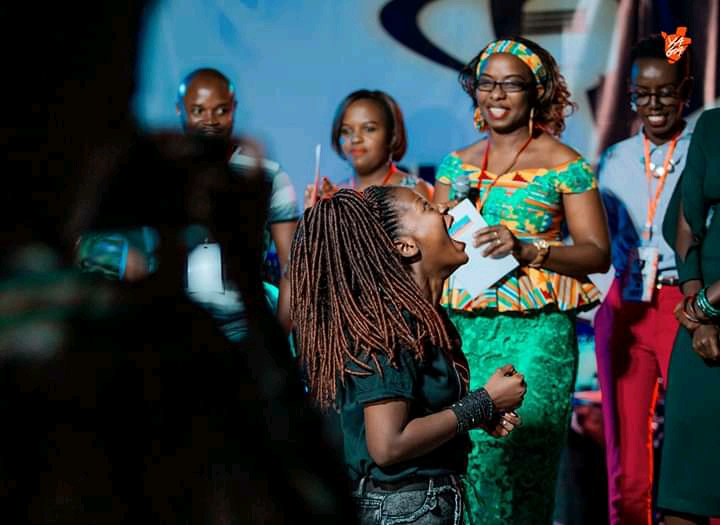 The verdict came in the grand finale of the national poetry slam championship on August 22nd. After an interruption of five months, COVID-19 obliged, Burundi finally holds its flag bearer for the grand’messe of African slam poetry. [1]

“Another girl!”, exclaims a voice on the bleachers on the patio of the Institute Français du Burundi (IFB). Novelist and salon owner Jeanne d’Arc Nduwayo, president of the jury, lends herself to the game of suspense. A classic to add a grain of salt to the ceremony. On a piece of paper that she holds in her hands, is the name of the woman whom the jury has designated national poetry slam champion.

The other three finalists, Chrétienne Nikuze, Brillant Stéphane and Abazar Nshimirimana know that they are no longer in the race to win the cup and represent Burundi at the 2021 edition of the ACSP (Africa Cup of Slam Poetry, also known as CASP in French). Their faces do not hide an ounce of bitterness, but they are playing fair. The trio stays close to the stage without showing any desire to run away.

Liesse Mutoni, the rising star of the Burundian slam (winner of the inter-school championship), relaxed, stands on one side with her hands folded on her lower back. On the other, Kerry Gladys, Coeur Rit (Heart Laughs) from her stage name, seems agitated. She nervously shakes her long dreadlocks. She’s going around in circles.

In the end, it was the name of Ntirampeba Kerry Gladys that echoed through the IFB’s loudspeakers. The audience leaves the hall. The new champion was jubilant, before throwing herself into the arms of Huguette Izobimpa, the winner of the first edition, just ahead of Kerry. “Justice is done, the second of last year had to be replaced by her runner-up”, says Kerry in a slamophiliac, hilarious manner. With her text ‘Revolted‘ (in French) the now champion won over the public and, surely, the jury. With her slightly hoarse voice, the young slamatists denounced a thousand and one evils that gnaw at Africa. The reason for writing the text ‘Revolted’, she mentiones in the slam: “It was necessary to speak about Africa, this mother who loses her children. It was necessary to speak about our roots before they are torn off by the West”.

Little by little slam is making its way in Burundi

Kerry Gladys’ coronation is the end of a long adventure. Jewe slam, the collective of Burundian slam artists has travelled through ten provinces. Writing workshops, auditions, detection of new talent from the interior of the country, slam has shed the image of “the art of young trendy Bujumbura”, a euphemism for an art disconnected from the rest of the country. As proof, Chrétienne Nikuze, a slam artist from Gitega (100 km from Bujumbura) qualified for the final.

Last year, with the first edition of Vuga, the first slam festival which saw the presence of big names in African slam such as the Chadian Croquemort and the Malagasy Cayla, slam took up a major challenge: to leave the walls of cultural centres to reach out to the people in the neighbourhoods. A satisfaction for Adasopo Junior, the artistic director of Jewe Slam, who in his special word saluted the growing number of slam-related events in Burundi. “It’s a great pride for us, in the end, it’s the slam that wins,” he said. Slam has been making its mark on the Burundian event scene for several years now. In artistic events, slam dancers are often invited, in the same way as other stars from other artistic worlds. Examples include Elodie Diaz’s performances in a packed stadium for Women’s Rights Day or the online concert by Belgian-Burundian slam dancer Joy to raise money for a charity.

It has become the voice of young people who don’t have their tongue in their mouth when it comes to denouncing the shortcomings of society, a commitment that is losing ground with the profusion of commercial music that is betting on market consumption. “Slam has a perfectionist side to it which does not tolerate the simplism of these songs made of onomatopoeia,” says a known artist of the slam scene at the end of the award ceremony.

Before defending the national colours in the land of the Negus, Kerry Gladys will host a slam session in October. Will she do better than her predecessor Huguette Izobimpa, who reached the quarter-finals? Time will tell..

[1]Due to Covid-19 the 2020 edition of the ACSP did not take place in Addis Ababa. The national championships had to be cancelled in several countries. According to Serge the griot, ambassador of the ACSP in Burundi, the final schedule of the second edition should be known soon after discussions with the Ethiopian authorities.