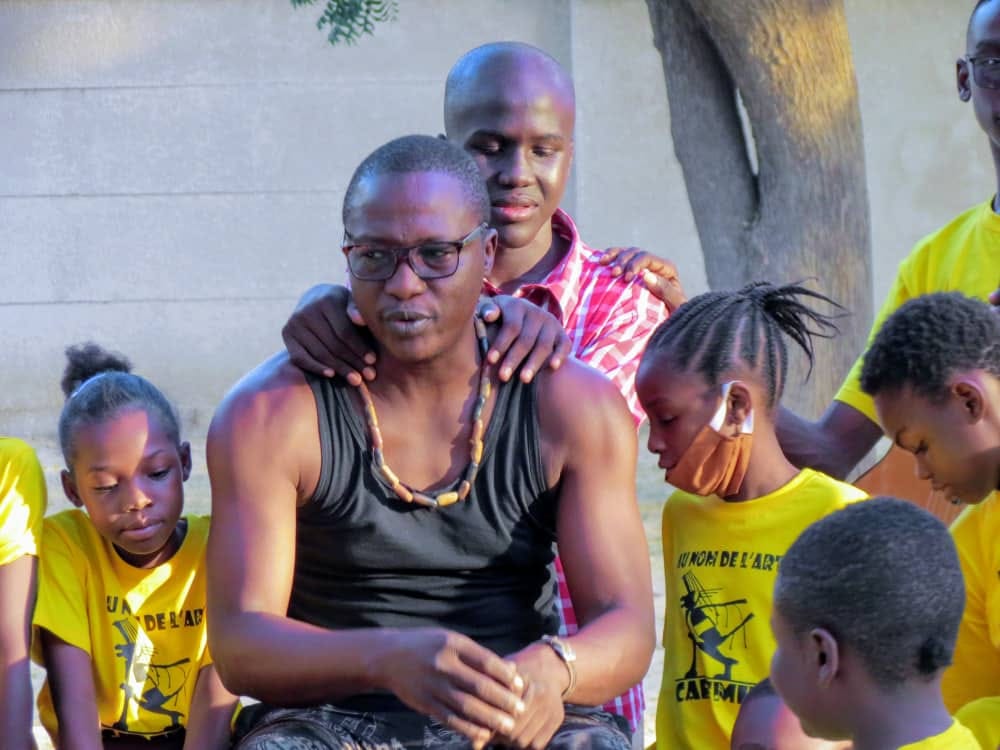 Artist Mawndoé sitting with children during his project “in the name of art”. © Mawndoé


After an eventful week and all the anger in Chad following the decree introduced by the government to limit the spread of the coronavirus by taking strict measures, the Chadians have moved up a gear. But against all odds, on Thursday, January 7, 2021, the government extended this famous decree. The anger in the cultural milieu is still being heard.

Having undergone a slight modification, the decree on protective measures against Covid-19 signed on 7 January on the substance remains the same. One week after the first decree on measures against Covid-19, strongly contested by Chadians in general and artists in particular. According to their opinion, these measures are antisocial, and the Chadian government does not intend to abdicate. The N’Djamenois still have another week to adapt to this new restrictive lifestyle. The anger remains the same.

The artist Mawndoé Célestin launched a vibrant appeal to the President of Chad, Marshal Idriss Deby in the morning of January 8 through his facebook page to find mitigating measures for Chadians:

“Dear Marshal,
Who am I to write to you? Just a citizen who is not very concerned about Covid-19. Don’t believe some of your employees who tell you that they are in control of the situation because they don’t have much control and that shows in the communication. As for the kaki bodies (military, police), we know and they too know that it is not for our security that they are in town… I spent a year in Chad to set up a project called “In the name of art” to bring children back to art and to develop pottery with the women of Gaoui without financial support from the state but I do it because I believe in Chad of the possible.

Today like many, I risk being stuck outside (Abidjan) while we left for 5 years to establish a real project of artistic, tourist and economic development. Of course, the evil is real, but review the methods because we don’t protect the people by condemning them to hunger or by depriving them of freedom. Put on your bowl outfit, come on the field and together we will make the fight of Bohoma against the Corona. Mawndoé”.

It should be remembered that Mawndoé Célestin is one of the tenors of Chadian music residing in Côte d’Ivoire but who is developing several artistic projects in his native Chad. In the same sense of claiming alongside the actors of music, young rappers Djaz B and N2A launched a song “Mouton”, referring to the unglamorous outburst of the Secretary of State for Health calling Chadians “Sheep” for not understanding the decree putting the city of N’Djamena in quarantine.

A few days earlier, it was the rapper Viceral Iss who was outraged by the curfew, who, according to him, had gone too far by simply asking for the curfew to be lifted. Several voices were raised in Chad to ask the government for mitigating measures. If the Chadian cultural milieu has been strongly affected by this health crisis since the beginning, artists have been mobilised each in their own way to carry the voice of the Chadian people.