Demonstrations in Cameroon: Anglophones response to their marginalization 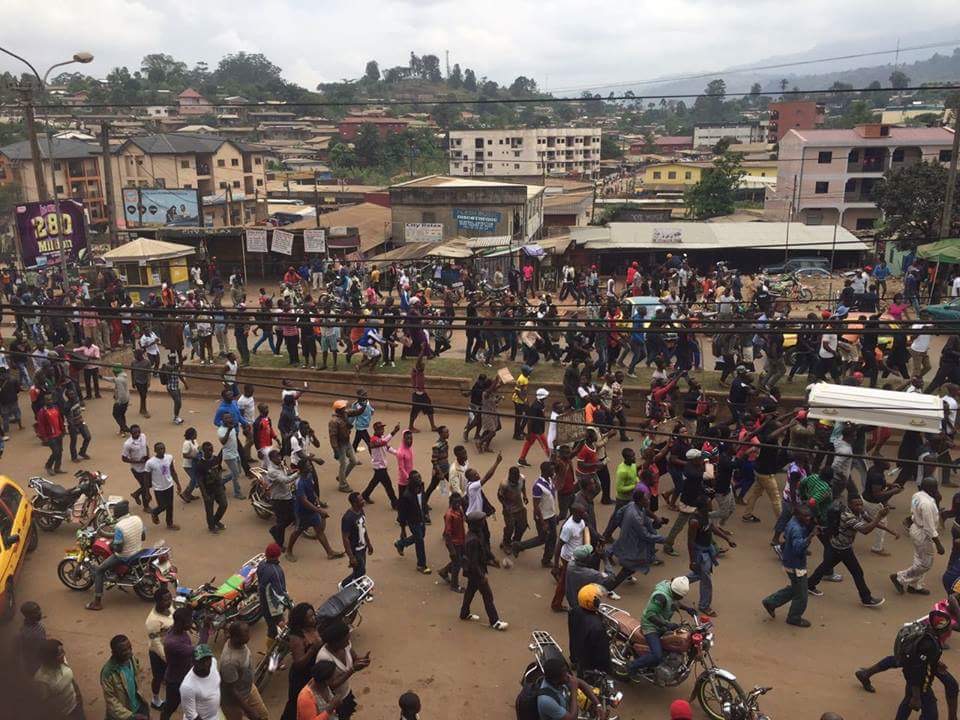 Citizens demonstrating in the streets of Bamenda. © Images from diaspora Whatsapp group

The situation in Bamenda, in the North West of Cameroon, and Buea, the South of Cameroon, has been tensed over the past weeks. It started with several demonstrations of lawyers and teachers, later on followed by students to let their voices be heard. They strive for the independence of Southern Cameroon; upset with the marginalisation and neglect of the Anglophone part of the country by the French speaking establishment, the lack of development (e.g. bad roads), the threat of elimination of the Anglophone legal system and it’s common law values, the ‘infiltration’ of French speaking teachers in the Anglophone area. Teachers have been on strike and schools have been closed since the start of the demonstrations.

The news has barely reached us. BBC and Aljazeera made a small report about the situation, but foremost Cameroonians in Cameroon and the diaspora have massively been reporting on social media (Facebook, WhatsApp). Over the past two weeks I have been receiving many photographs and videos of the escalations of the demonstrations, accompanied by voice and text messages, from contacs living in the areas. They show cars being burned down, how the police attacked demonstrators, entering the student residential area in Buea with water cannons, intimidating and humiliating people by letting them roll in mud for example, and wounded citizens.

Last week Monday a demonstration at the heart of Bamenda was initiated by ‘freedom fighter’ Macho BBC, as he calls himself. He was standing in a coffin which represented his determination to fight till the end. The next day he had spread an audio recording around social media inviting other citizens to join the fight.

The situation in Bamenda escalated yesterday. According to citizens, at least six people have been shot by the police and died. The body of a young man who passed away yesterday was carried around town to show the sad and confusing situation.

Discontent and anger have existed for a long time. But what is happening now is different from all the tension that has been there all this while. Where does this lead to?