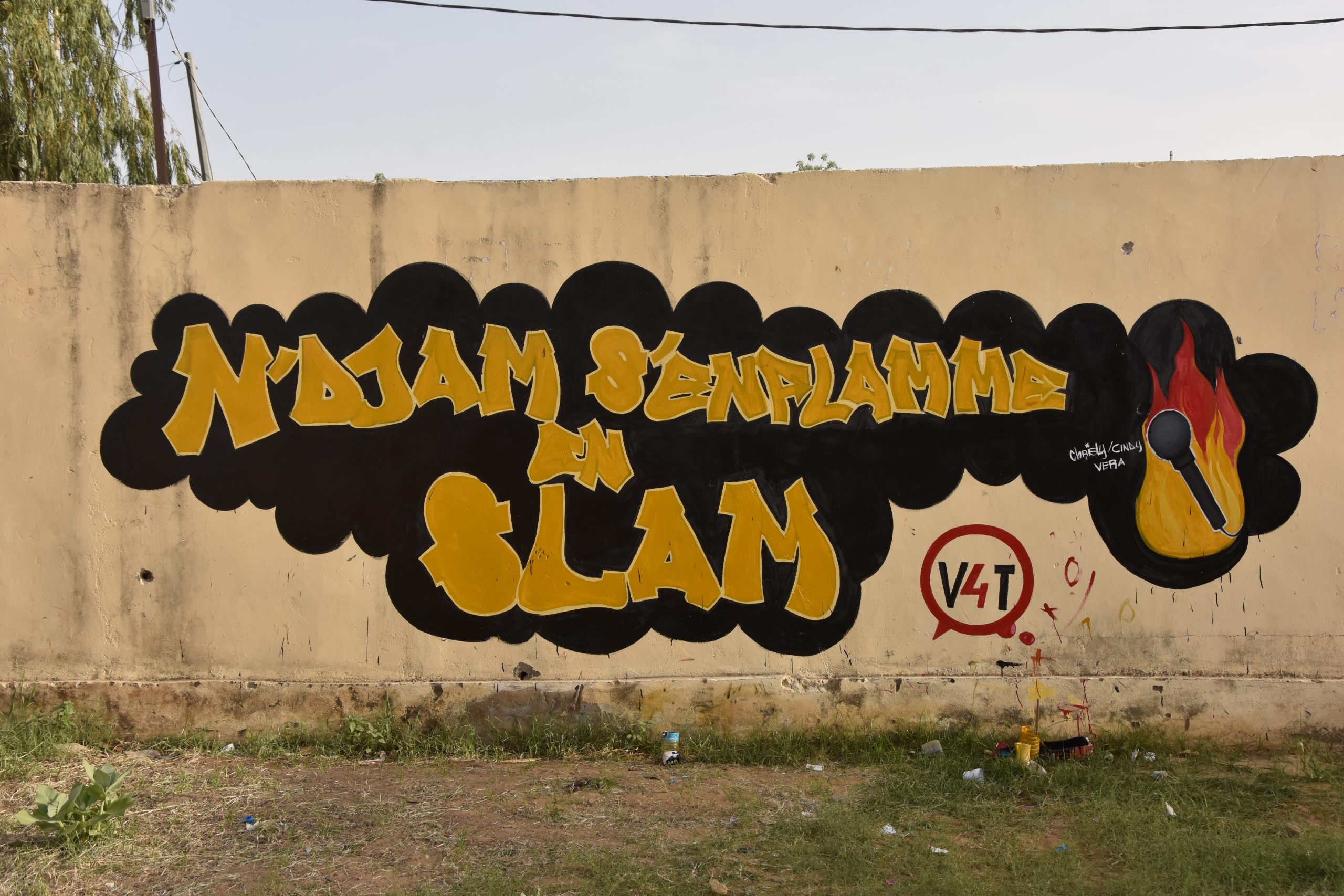 In March 2016, the 3rd edition of the slam festival N’djam s’Enflamme en Slam took place in the heart of the city N’djamena in Chad. Founder and executive director Didier Lalaye (a.k.a. Croquemort) and his supporting team brought more than ten artists together from West and Central Africa, and Europe.
Slam is an art form that combines literature and music, and as Didier describes, “a true vehicle to transmit a message”. The festival offers a platform for upcoming and established slam artists to exchange and share their critical words, ideas, and emotions that are part of everyday life with their audience. It is more than an event to listen to what the artists want to share, it is meant to be a process of creating music and art together and provoke responses. Croquemort kicks of with his concert at the l’Institut Francais. The theatre is full, all the seats are taken and a buzz of voices fills the space as the audience waits for the show to start. Croquemort wears a skull face mask at his performance. As soon as Croquemort uncovers the mask by lifting up the white scarf the audience responds: people rejoicing, surprise, laughter, some frightened.
The mask shows the complexity of the social political landscape in Chad. “The mask shows how Chad works”, Croquemort explains. “The face that politicians show is that Chad is beautiful, but it is us who destroy it. Chad is ugly, but from the inside beautiful ideas exist that are suffocated.” Aiming to make people aware of the injustice and inequality that is present in Chadian society, the mask serves its purpose empowering his message. It is a confusing image which forces the audience to critically think about the system of the society that they are living in.
At his right, a blackboard with a chalk-drawn fist arises, symbolising the fight for change, and next to it a board with a big question mark. On his left, a young lady with long hair and curvy body is drawn. She has her right hand up and throws banknotes in the air. She represents the latest winner of the beauty pageant competition ‘Miss Chad’. In his song Ma Miss Tchad et Moi (My Miss Chad and Me) Croquemort speaks about the contest with a wink, perceiving the competition and the Miss as symbols that reflect the poverty in the country, hence, the contradiction of its realities. Croquemort speaks to his audience and creates a dialogue with them. The performance invites them to respond. The audience understands his message and picks up on the lyrics of the chorus at the end of the song: pauverte! (“poverty”). Croquemort waits a couple of seconds and then takes his mask off and reveals his face.

My miss Chad does not have the size of a giraffe
She has no podium, no sponsor
In newspapers she has no paragraphs
No advertising, she has no mentor
(…)

My Miss is invisivle but from south to north
From the east to the west, everyone knows it
She visits our homes, enters our pores
In our pockets, to deprive us
Makes our mothers dirty like porc
Their glue is cholera and prevents us to treat them
My Miss does not like the Vilas,
It does not wet for the V8
She fears the ministers, the deputies
Great restaurants, great hotels and their suites
(…)

The festival is not merely about listening to the other, but also brings slam to a higher level; transcend individual differences and similarities, and opens up space for new and spontaneous collaborations to create a story together. This happened at the Beat Lab Workshop of DJ Martijn Kip (from the Dutch radio station ‘Kipcornah’). Local sounds, like the tapping of a stick on a wooden plank, the closing of a door, tones of voices, recorded in the streets of N’Djamena formed the basis of a song created in the set-up studio. Music can be inspired by the sounds of the environment in which it is created and reinforces and complements the message that one wants to bring across.
Inspired young people were encouraged in the Coupe de Slam competition to engage in slam poetry and voice out. In the open-air theatre ‘Maison de Quartier’, competitors from different backgrounds battled for the title, which also included a performing at the big stages the following evenings.

Slam poetry is not just putting down words on paper. How do you start a slam poem? What do you want to tell? Which words do you choose to convey your message? And the performative aspects of slam: how do you transfer your message thought the public through your voice, volume, tone, intonation, gestures? All these questions were discussed in the Writing Workshop of Micromega (Congo) and of slam artist Momo (Togo) and blogger Zyzou (Chad). As Momo asks the participants to jot down key lines from which they can build up their song text, he composes a short poem himself and breaks it down into pieces to explain the techniques of writing. Starting from their personal experiences and choosing a subject which is close to their interest is most important. In the next phase, their stories can be places in the social-political context of their society.
The participants are encouraged to create their own style of performing: transferring their message while making personal contact with their audience. Gradually, the students warm up and feel comfortable on stage. Momo cannot stop smiling when he sees how initially shy young adults blossom into spoken word artists.

N’djam s’enflamme en slam also offers the opportunity for artists to come together and talk about problem statements and topics that keep them busy, and moreover critically reflect and discuss their own social and political positions in society. Debate about the role and influence of Facebook. © Vera Bakker

This happens between the events when enjoying a meal or drinking together, and in organised debates in which students, journalists, activists and other artists are invited to join the roundtable. As a lot of people are strongly connected through the Internet nowadays, the role of Facebook in everyday communication and connectivity was discussed in one of the debates. The social media platform allows for a fast and easy communication, and according to the participants a great way to connect to young people in particular. The flow of information, on social, political and economic issues and events, in the debates and conversations held online is enormous. Following and participating in these discussions is especially for the slam artists a way to understand what is happening in society and beyond, and accordingly an inspiration for their work. The role of Facebook also becomes clear in the way the artists textually and visually document the festival online and reach and connect with many international followers. Besides the Internet being an important source of information it is a major communication tool that exceeds boundaries, connecting young opinion makers and socio-political activists.

The gatherings of the slam artists and musicians (amongst the Voice4Thought band) in the rehearsal spaces are the sources for creative projects. Music and words are synchronised on the spot and different art and music styles are combined. The experiences during the day are taken to the evening concert in one of the public theatres in N’Djamena. Amee from Ivory Coast is one of the female artists at the festival. In her poems she talks about life in all aspects: from love to the relation between people and their environment, changing dynamics, violence, revolution, harmful practices, the continent Africa, its history, and more personal; how she was introduced to poetry, the life of an artist.
Slam poetry is for Amee a “way of artistic expression, a form of artistic creation and a source of motivation, a need, an art and my mission”. In her poem ‘Adam and Eve’ she addresses the women’s place in society and women’s worth. Feminism plays a vital role in her work. Amee states that the woman is not the weaker sex as some of us might say. Amee exalts the audience with the musicality of her rhymes, the style figures, and the expression of strong emotions. As slam poetry is essentially based on speech Amee uses her whole body to empower the ideas she shares with her audience. N’djam s’enflamme en slam is an opening for all the “beautiful ideas”, quoting Croquemort, that exist in the societies of the artists that are largely oppressed by the ones in power. New coalitions and collaborations are made and are the starting point for new messages. It is these Festivals that create a platform for people to speak out and extend their voices, not only in a locality but across borders. The festival itself is a confrontation between the feelings of mistrust, injustice and uncertainty that is deeply rooted in the people and the possibilities and celebration of music to start a conversation about these issues and take action. It starts with words, words that become part of a bigger story that needs to be told, shared and transmitted. And it is the music and art that serve as a vehicle. As Amee says in her song “Les Mots” (“My Words”), being afraid that here words might just be words: “Mais ces mots sont ma facon a moi de changer les choses, Je les dirai jusqu’à l’usure, jusqu’à ce que mon Afrique ose. Ose changer les mentalités par la réflexion. Ose évoluer d’elle-même avec courage et abnegation.” (but these words are my way to change things, I will say them until the wear and tear, until my Africa dares. Dare to change mentalities through reflection. Dare to evolve with courage and self-denial). This is how N’Djamena ignites in slam.

We leave the symbol of the festival on the walls of the public Ballet National theatre in N’Djamena (see cover photo of this report), hopefully inspiring and triggering its viewers to think critically and talk with each other, leading to the next edition of the festival.