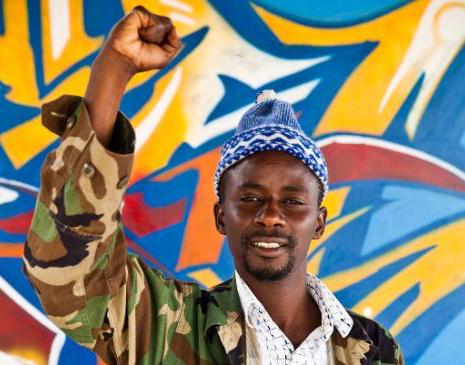 Fou Malade (born Malal Almamy Tall, Saint Louis, 1974) is a hip hop artist from Senegal. He is one of the founders of the Y’en a marre movement.

Growing up in Guédiawaye, on the outskirts of Dakar, he became active in the hip hop scene in 1994. In 2003 he released an album with his group Bat’haillons Blin-D. One of the songs on the album was called Fou Malade, and it became his nickname. Fou Malade and his group organised rap poétique, a project in secondary schools utilising rap as an educational tool, and ran a series of workshops in prisons aiming at reintegration in society of ex-convicts.

In 2004 Fou Malade recorded the song ‘Taximan’ with Viviane N’dour. The year after he released his first solo album, ‘Radio Kankan’ containing the hit single ‘Tioukh Na Kaye’. In 2008 he participated in the song ‘Politic amagni’ with Manu Chao, Amadou & Mariam on Mokobe’s first album. Fou Malade often with his group Bat’Haillon Blin-d, with whom he released the album ‘ResistaNTS’ in 2012.

In 2011 Fou Malade was one of the founders of Y’en a marre, a social movement led by young Senegalese, including many hip hop artists, in an effort to get young people to vote, to fight against corruption and to breathe fresh air into the Senegalese civil society and political arena.