From heart to hard: the escalating refugee crisis in Greece from within 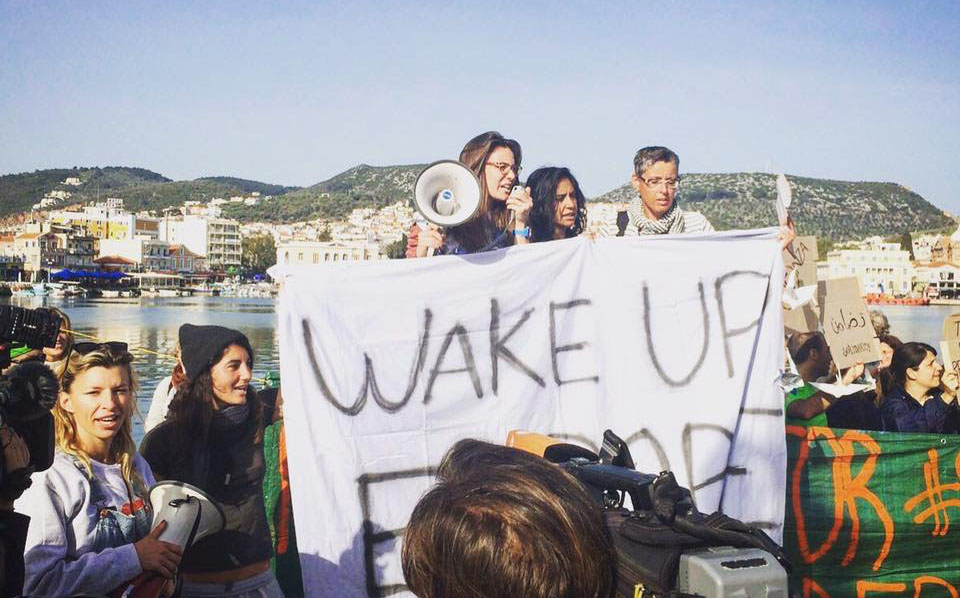 In October I came back to the Netherlands after 3,5 years having seen with own eyes, having heard with own ears, having felt with own heart and having given with own hands to the gigantic refugee crisis in Greece. Since February 2016 I have been working in Greece as an independent volunteer on camps and for several projects on Lesbos and the mainland, like Thessaloniki and Athens.

I deeply worry about the fast recent developments in and around Greece, and I hereby ask you to do the same.

The crisis is hardening

After a long unfair radio silence, the refugee crisis is finally back in Dutch media. Unfortunately with a very worrying reason: the situation on the islands of Lesbos, Chios, Samos, the border at Evros and entire Greece is getting totally out of hand ever since President Erdogan opened the Turkish borders on February 29th. With this action he broke the EU-Turkey deal of March 2016, like he threatened to do already plenty of times before. Honestly, the EU-Turkey deal has never been a real solution and from day one, when I was at the camp amongst hundreds of refugees myself, to do the work pro deo what our politicians are being well paid for: caring for the most vulnerable, doomed to fail.

Since Leap Day, I have received several heartbreaking and worrying messages from friends on Lesbos, indicating that the situation has been terrible for ages, but has now become untenable. Most of them, like many NGOs on Lesbos, have been evacuated to Athens to ensure their safety. Besides the refugees themselves, the islanders and far-right hooligans are now also strongly rebelling against the outgrowth of the situation. They accept it no longer and are no longer able to take it. As a result, volunteers and humanitarian workers were attacked and threatened. Last weekend the International School of Peace, a part of One Happy Family project on Lesbos, went up in flames. Lighted. A project built in 2017 by volunteers, including my friends, who have since given endless love and energy to offer children in Moria deprived of all human dignity at least one thing: education. Education and with that, if it is awarded to them, a future… Gone classroom. Gone hope? A burned school in Lesbos, 2020. Photo by the International School of Peace, Lesbos

We have to act NOW

I’m writing this blog to share my concerns and information from within. In fact, to provoke awareness and action. We can pretend that Greece is far away – and in this turbulent time of the Corona virus, we even tend to care only about ourselves – but I know from extensive experience that you are there in 3.5 hours. As an active and committed citizen of Europe, I have been indescribably ashamed, watching how little Europe actually does and how much we collectively look away. Besides being ashamed, I am very concerned. The situation in Greece and around the Turkish-Greek border is getting out of hand, with all its consequences. Right-wing extremist groups are growing in size and become more violent, seen the recent situation on Lesbos.

Let’s be very clear: contrary to what many (populist) media suggests, we are not talking about numbers here, but about people, or even better: fellow humans. Moreover, it is often not about the so-called ‘fortune seekers’ but about refugees; people whom, as a result of war, poverty and insecurity, have left everything behind with only one goal: to survive.

These fellow humans have been neglected by Europe since 2015, but especially after the insane so-called ‘EU-Turkey Deal’ of March 2016. They have been placed in overcrowded, inhumane camps in which basic needs and facilities are not met in any way. The well-known horror camp Moria with an official capacity of 2,200 currently ‘houses’ more than 20,000 refugees inside and outside the barbed wire-enclosed fences and walls. The expansive olive grove next to Moria, on which in 2016 there was a completely volunteer-run tent camp where I worked myself, is again full of tents and huts. I have seen with own eyes what daily life in refugee camps looks like. Just to name a few:
Toilets and showers must be shared by hundreds or even thousands. Due to the lack of electricity, women sleep in diapers at night or are forced to take their husbands with them when they need to go to the bathroom, because it is dangerous to go to the toilet in the middle of the night. For food, usually delivered in damp plastic containers, people have to queue for hours – rain or shine, sick or healthy. Many just get one bottle of mineral water a day, even in the sweltering Greek summers. Lesbos is cold in winter, the wind is bleak, a tent offers little protection, not at all for vulnerable elderly, the sick, babies and young children. The situation has been so hopeless since the deal, asylum procedures take an indescribable (months to even years) amount of time, that suicide attempts and self-harm occur among the entire population. Even young children in Moria are so traumatized that they injure themselves, for example, by banging their heads against the wall so hard until they bleed. Uproar and stabbing are common due to lack of everything, hopelessness, cultural and political diversity and the total lack of future prospects and meaning in life. Because I am terribly ashamed, because the situation touches my heart and my sense of responsibility, because I find it absolutely unacceptable how Europe is looking away. Because what happens (and mainly doesn’t happen) goes against all norms and values, humanity and human rights that we signed ourselves. And because I think we should do it en masse, worry about this and roll up our sleeves, instead of washing our hands clean in innocence.

I met up with another worried civilian this week, together we initiate action. He listened attentively to one of the memories of Lesbos in 2016 that flowed out of my mouth, like a song from a jukebox after you have fed it a coin. He asked me: “Do you consider yourself an activist?” Though a new question to me, I answered fluently: “With all I have seen happening right in front of my eyes, all that have been whispered and screamed straight in my ears, there  is no other way than becoming an activist. What happens in Greece, while our gouvernment looks away continuesly is undigestable. The only thing I can do, I even feel the moral obligation for all the people that I left behind, is standing up against it and raise my voice- and hopefully awareness. Awareness is the first step towards change.” Time to unwind after arriving at Olive Grove Camp, Lesbos 2016

The EU was established as a cooperation under the guise of: together we stand stronger. Where are you Europe, where have you been all this time? Where are you while many volunteers from all over the world, people like me, do your well-paid work for nothing: taking care of the most vulnerable? Who do you think you are to let this happen? Looking away while people die and wither to death is in my opinion a war crime, a mortal sin that must be severely punished. As a concerned, dedicated and active citizen of Europe, I am disgusted with disbelief, anger and endless worries. The refugee crisis is not from Greece, Italy or Turkey because they are geographically the unlucky ones that people wash-up ashore on paper-thin boats – alive and lifeless. This dire crisis affects us all, and we are therefore together responsible for finding and propagating the most humane solution possible.

Europe must act now, because people slaughter each other. I am very concerned about the refugees who have been left almost alone, my friends, fellow volunteers, humanitarian workers, and also the Greeks because their country has been plagued for years by a deep financial crisis, on top of which a gigantic refugee crisis has come. The situation is unbeatable. Especially now that fascist violence is growing at the seems, there is no longer any support for the crowded, degrading concentration camps, and now that the first corona case has been diagnosed on Lesbos. With this, the more than 20,000 refugees have been left to their hopeless fate, as aid workers have withdrawn en masse, causing a gigantic pandemic to lurk. And that also concerns us all.

For God’s sake, let us look out a little more for each other. And I don’t just mean to the family members in our house and the friends around us. Let’s actively expand our view and our heart- also in this time of Corona. We will all benefit from that in the end.
Let’s realize before we again relive our past: “We’ve looked away”, equates to “We didn’t know”…

Marije Mutter is a social worker, teacher and cultural anthropologist specialised in migration. As a social worker she worked in a variety of settings, such as closed and forensic psychiatry and youth in crisis situations. She compassionately worked with refugees and failed asylum seekers in the Netherlands. From February 2016 until October 2019 she has been volunteering at several refugee camps and for different projects in Greece, on the island of Lesbos and on several locations on the mainland, like Thessaloniki and Athens. She will report on her experiences on the ground, to share what she has seen with own eyes and to create awareness, which she feels like a moral obligation to all the people she left behind in the dire circumstances in Greece. Read more of Marije’s posts here.