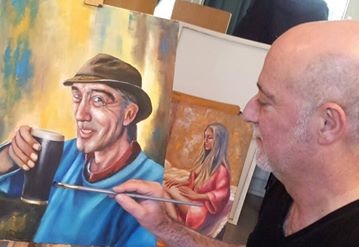 Jomard Dirki is a Syrian painter who, after some wanderings, arrived in the Netherlands in 2015 as a refugee. His situation couldn’t stop him from pursuing his passion, and as such, he has been painting and selling his works over the last couple of years in Lebanon and now in the Netherlands.

During the Voice4Thought Festival, he will show some of his artworks at the exhibition ‘In Movement’. His paintings can be characterised as realistic, a result of the challenge he gave onto himself, to master what he finds the most difficult style of painting. When he was 16, his neighbour annex art teacher taught him the skill of portrait painting. Up to this day, portrait painting makes up the largest share of his paintings. In 2011, coming from Chile he moved to Lebanon, as safe entry into Syria was impossible unless he would join the military. He took up painting after years of being an agricultural engineer and soon rented a gallery in Byblos, Lebanon. In addition to selling his paintings, he taught a group of students the basics of oil painting on a weekly basis.

In 2014 Syrian residents in Lebanon started having serious problems because the Lebanese government refused to give out permanent ID cards and equally prohibited Syrians working legally in the country. His wife and daughter had already moved to Qatar to stay with family there and Jomard and his son then decided to risk the trip to Europe in order to find a safer haven. Since his arrival in the Netherlands, he has been painting wherever and whenever he had the opportunity: in the asylum centres in Apeldoorn and Dronten and now in his new home in Rotterdam.