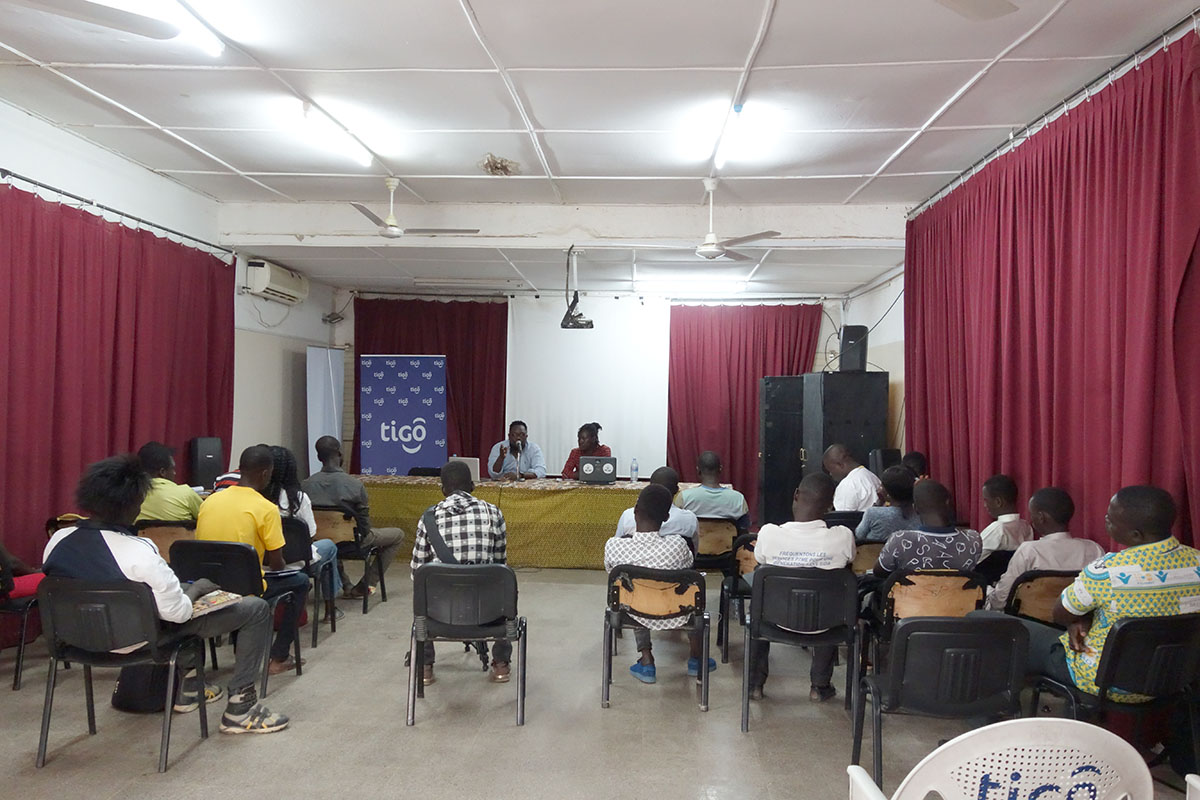 Before the Africa Cup of Slam Poetry (ACSP) was officially opened, and before all the participating candidates had arrived, the Cameroonian slammer Lydol gave a workshop From the idea to the stage about the basics of slam poetry. On 6 November about 20 people gathered in the cultural center Baba Moustapha. As the workshop proceeded, about 15 others who finished their activities in the cultural center joined the circle to listen to Lydol. Lydol is a 24-year-old Cameroonian slam poet. Active in slam poetry since 2009, she writes mostly about love, hope, and peace – key themes that, according to her, unite rather than divide people.

She chose the word ‘adventure’ for a brainstorm with all participants. What association does ‘adventure’ bring you? Europe, meetings, experience, risks, sharing, ambition, endurance, and migration are all words that come to the minds of the participants. As everyone was encouraged to write and share a sentence about ‘adventure’, it was remarkable how going abroad and travelling featured in everyone’s phrases. Lydol remarked: ‘’adventure is not only about leaving a place, it is a lot more than that. Try to think beyond this common conception.’’ Therefore, she asked the participants to write a verse about ‘adventure’ which can be about everything except ‘leaving’. After some rounds of practice with different basic rhyme schemes such as abab and abba, participants started to share their ideas.

Was shared by Chaïma, with her 11 years old the youngest artist at the ACSP.

By continuing to stress the exercise to think beyond ‘leaving’ as an insurmountable aspect of a slam text about ‘adventure’, Lydol transmitted a certain conscience and critical look on slam poetry as an art of reflection: artists should be able to go beyond common conceptions and to trigger the minds of the audience to think differently about popular themes. Again, Chaïma was the first to raise her hand and share her verse:

After the recitals of the participants, Lydol moved From the idea to the stage: “slam poetry is a profession; we work on it every single day… To write a good text is not enough; you also have to know how to perform it.” Slam poetry, she argued, is in fact a combination of poetry, music, and theatre. “It’s the little details that make all the difference”, so to work on your gestures, behaviour, intonation, and articulation on stage pays off in better transmitting your message. About this message, Lydol said: “as slammers we are spokesmen, so we have to reflect on what is our message.” And with regards to how a potentially sensitive message can be transmitted, she said: “we can talk about love without saying the words ‘I love you’. So, we can work our way around certain words and issues, without remaining silent about them.”

As a closing remark to the workshop, Zyzou (a Chadian blogger) said: “To make for good slam poetry, you have to leave the ordinary.” He added, “if you want to reach something, you should not wait” (which in French nicely rhymes, and reads like a slam: si tu veux atteindre quelque chose, il faut pas attendre).