The Jeuness’Art School of Slam 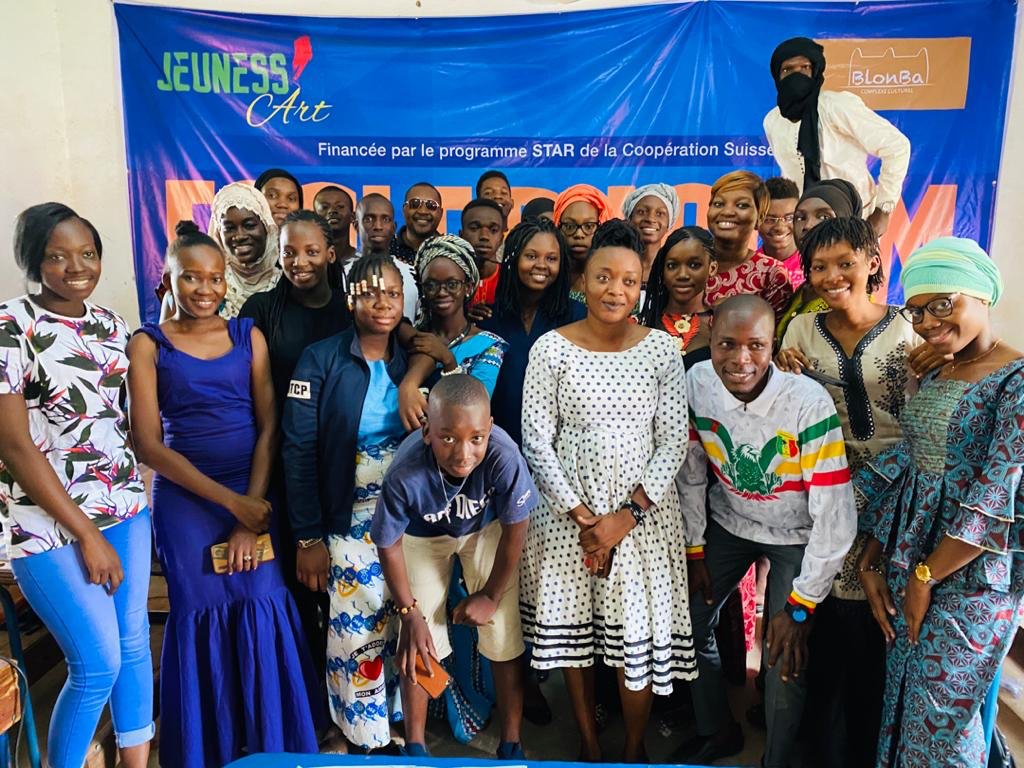 The Association Jeuness’Art, is a Malian non-profit organisation whose objective is to promote the Arts, democracy, citizenship and human rights. It undertakes several annual actions in this direction by putting art at the centre of its actions. As an implementing partner of V4T, it actively participates in the training of young artists from the Voice4thought Académie project by providing theatre coaching on the sites of Bankass, Bougouni, Macina and Douentza.

The Slam School takes place during the summer holidays to occupy the time of young people who are very often prey to intellectual inactivity which can lead to behavioural aberrations. In this way we try to channel the time of one month to around thirty young people. At the end of each edition, a restitution ceremony is organised to introduce the now Slamers and officially present them with a certificate. In addition to the certificate ceremony, a show developed during the school is presented to the public.

“Démocracrise” is the restitution show of the fourth edition of the School of Slam. It is written by the 30 Slam students and the artistic direction of Jeuness’Art. Coinciding with the national news, it is a summary of 34 views on the latest socio-political crisis in Mali. It is inspired by the story of Sya Yatabaré as the constitution violated by the wise men and other decision-makers. In a tale that brings the camps and the belligerents face to face, “Démocracrise” in a mixture of slam, dance, storytelling, singing and staging. The terms that have dominated the news are sprung up to keep the freshness of the news and the proposals are released to contribute to a real democracy that the trial and error of alternating at the head of the state.

Financed by the Star programme of the Swiss cooperation and organised by the Association Jeuness’Art, this 4th edition has kept all its promises in the eyes of all the objectives it had set itself. Specially dedicated to the learning of slam, this Slam School turned into a true citizen industry where, for one month, 30 candidates, based on a meticulous casting among 300 candidates, were selected on the basis of their availability, their knowledge of French and local languages, general culture and especially slam. Trained in slam writing and composition techniques, in diction, stage presence, communication and a range of rubrics alluding to active and participative citizenship, for one month, the students lent themselves body and soul to make the most of the lessons.

The restitution ceremony, which consecrated the solemn presentation of their certificates, was an opportunity for them, in a scenic combination with their slammasters (trainers) and assistants, to present their achievements through a baptism of fire around a staging in a hybrid mixture of slam, theatre and song to depict the deep socio-political crisis that led to the coup d’état. Through this show, the slam students wanted to give their divergent points of view on the crisis and its actors, but above all to make citizen proposals for the reconstruction of the Malian nation and state. Through the show “Democracrise”, the now Slam Masters and their slam masters retraced the experience of Mali, immersed themselves in its political and social history, in its crises to diagnose democracy, corruption, elections, the problem of national education through the school crisis, communitarianism, the lack of political leadership, the interference of religious leaders in the political sphere, the repetitive rape of the constitution, coups d’état and to propose solutions.

In a room of the French Institute which refused to accept anyone, the ceremony of restitution of this 4th edition ended with a standing ovation from a public visibly satisfied with the quality of the work done by the slameurs, freshly out of the mussels of their training.