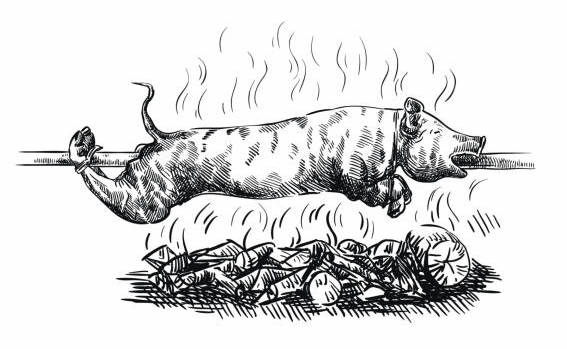 Read the original text of this article in Dutch here.

Charlie2003 is a pseudonym. The real name of the author is known by our editors.

In the talk show of Khalid & Sophie on Dutch TV on Thursday 1 September 2022, Mr. Dé van de Riet of the meat lobby was interviewed about its new campaign. Tim Hofman, documentary maker, and Humberto Tan, host of another talk show, both table guests, mainly ask the critical questions. Khalid, the host, keeps a low profile. Hofman and Tan try to find out from Van de Riet in what way meat-eaters are bothered by polarisation. Van de Riet does not come up with a convincing example. Does he know what polarisation actually is?

In my understanding, this is a reaction to campaigns by animal welfare organisations, an anti-campaign. In this case, the campaign of Wakker Dier about dairy cows is explicitly mentioned. Van de Riet trivialises the findings of this organisation and denies that the meat industry is guilty of abuses and exploitation of animals. Who is polarising? He also emphasises how well entrepreneurs are doing in the meat industry. That they work in an animal-friendly way and that they take measures to burden the environment as little as possible. He also says that the campaign is not about getting people to eat more meat, but about making them feel better about eating meat. How can it be that such a campaign is necessary?

At a time when it is so important that this sector shrinks because of climate change and the nitrogen problem, and when half the world has little or no food, should the average Dutchman suddenly feel good about eating a piece of meat? It is too crazy for words.

To come back to the other keywords of Mr. Dé van de Riet concerning animal welfare: the five freedoms that are used in veterinary medicine as guidelines for the welfare of animals (but also of people) are:

How can a pig that never gets to go outside show its species-specific behaviour? How can a cow that is inseminated and that has to give birth to a calf for our milk and meat consumption, be free from physical distress? And how can a goat, which we use to produce goat’s milk and whose offspring are regarded as waste products, and which is dehorned without anaesthetic, be free from fear and physical distress? All these animals are often locked up for long periods of time, have no control over their own bodies, no choice in food, no choice in how to raise their young. They have completely lost control over their lives. There are good reasons to believe that all these animals will eventually suffer from chronic stress. After a life full of discomfort, they are transported in an overcrowded truck (in sometimes inhuman temperatures). They are then slaughtered on a conveyor belt.  And yes, there are legal frameworks for this. But how animal-friendly are these legal frameworks? The guidelines of the National Heat Plan apply to the transport of livestock from 27 degrees Celsius upwards. Only at 35 degrees Celsius or higher, the government considers the transport of livestock too extreme to guarantee an acceptable level of animal welfare. What level of animal welfare are we talking about then? Livestock farmers are also allowed to have young animals castrated or have tails, horns and teeth removed or filed away without any form of anaesthetic. These operations are only necessary because too many animals are kept in too small a space and will therefore injure each other and their ‘carers’. The same government has imposed bans on these kinds of operations on pets. Among them, for example, the docking of the tail and/or ears. On the website of the NVWA (Food and Consumer Product Safety Authority) it literally says that in the case of horses, it affects the animal’s welfare. Why would this not apply to other animals? Not to mention the lack of enforcement of these regulations. Anyone who is aware of this cannot claim with dry eyes that the meat industry is animal-friendly. Animals have an autonomous nervous system and are capable of experiencing pain and emotions. All these arguments and facts are nothing new. Hence my perplexity about this campaign by the meat lobby.

How can lobbyist van de Riet use the words ‘socially responsible’? Can the practice of keeping animals on an industrial scale and the current consumption of meat be considered socially responsible at all?  He accuses the animal welfare organisations of exaggerating abuses and that this doesn’t paints a realistic picture of the meat industry. These organisations investigate animal welfare in the sector and report during unannounced visits to these large scale farms, slaughter houses and transport companies. How realistic do you want it to be? In addition, some  abuses are documented in undercover footage.  Enough evidence to show that these abuses do exist.

Of course, the farmer and the butcher will be put in a good light in this campaign.  After all, that is the purpose of this campaign. Van de Riet literally says that he wants to improve the image of the meat industry with this campaign.

So what van de Riet wants to do through the meat industry is make you feel good about something immoral. That’s seriously wrong. In fact, that is at the root of the animal cruelty problem. Because for decades the meat industry has successfully managed to ensure that the meat you buy is no longer directly associated with the animal it was.

Unfortunately, there are still people who, when it suits them, take lairs at their word. It is time for us to listen carefully and critically and obey our conscience. Change is difficult, but not impossible.