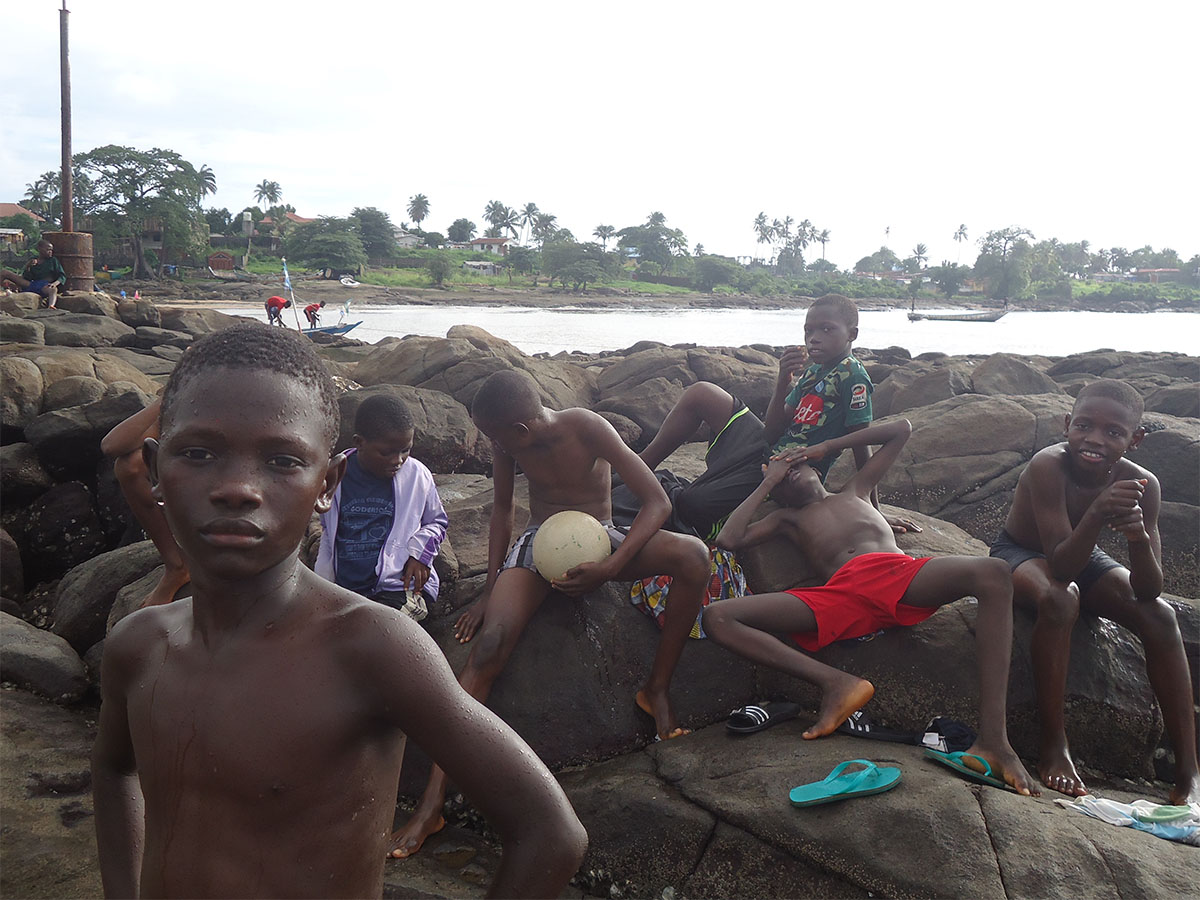 This article offers a reflection on a participatory photography research project that was conducted as part of a wider research study in Sierra Leone. Young people with speech and hearing impairments were given a camera to elicit photos of their daily lives, their enjoyments and challenges and were then asked to discuss them. The photographs offered a striking, personal insight into the living realities of these young people, drawing attention to what it means to have a disability in Sierra Leone. The project itself had a wider impact on the young people, who felt valued in being asked to take part, and on the organisation that supports them, who have since come to greater appreciate their potential for contributing. The method is a valuable emancipatory tool for undertaking research, especially in cases that involve marginalised groups whose voices tend to be ignored or people who do not use speech as their primary mode of communication.

In June to August 2016, I spent two months in Sierra Leone collecting data to form the basis of my Masters thesis. The purpose of my study was to investigate what has been achieved from disability advocacy efforts by a grassroots disability-rights NGO, One Family People. Before I could appreciate the broader goals of disability lobbying efforts in Sierra Leone, I wanted to gain a better understanding of what it means to live with a disability in Sierra Leone. As a white, middle class, British female who does not have a disability, the contrasts with my own life experiences were vast and I found it challenging at times to comprehend the scale of difficulties that face these young people on a daily basis.

The stigma surrounding disability is deeply entrenched in Sierra Leone, with a widely held belief that it is caused by a parent’s sin or the work of the devil (Powell 2010). When a child is born with a disability, families sometimes leave the baby in the forest, believing that the child must be returned to the demon spirits from where they came. Others abandon them altogether. Many people with disabilities end up living on the streets, having to engage in activities to satisfy their basic needs for short-term survival, including begging and theft. This causes a common perception that people with disabilities are trouble-makers, and that their behaviour is the cause of their disability: “Na dat mehk God mehk u so” [that is why God made you this way], is a charge frequently levelled towards them in instances of dispute. They are figures for mockery, often subjected to deliberate provocation and denied service by shopkeepers who believe they are there to beg or that serving them will bring bad luck. “The society makes you feel like you are a disabled. There is something like this barrier between us and them. They don’t recognise us, they think we are useless”, one girl with a disability told me.

The majority of my data collection came from interviews and focus groups with staff members of the organisation, power-holders in the Sierra Leonean government and other disability activists in civil society, as well as young people with disabilities who are supported by this organisation. The various different disabilities include physical disabilities, mostly as a result of childhood polio, visual impairments and speech and hearing impairments.

In my focus group with young people with speech and hearing impairments, I needed the assistance of a sign language interpreter. However, I found that this somewhat delayed the flow of conversation: I spoke to the interpreter, the interpreter translated it to the group, then the group conversed with the interpreter, who in turn translated it back to me. It was therefore difficult to facilitate an open dialogue in which I was involved, and the amount of information I gained from a one-hour interview was far less than in my other interviews, due to the time delay with the translation. Furthermore, the interception of a translator brought a risk that meaning was lost or altered in the translation process. This was problematic because meaning is ultimately the basis of qualitative research. Yet despite the challenges during our discussion, it was clear that these young people have many important things to say, but are rarely listened to.

Academics in the field of children and youth studies (Grover 2004, James 2007) emphasise the importance of giving children and young people a voice in the research process, but these young people are literally without a voice because they do not use speech as their primary mode of communication. Ashby (2011) discusses the methodological meanings of giving research participants a “voice”, and argues that the definition of voice is not limited to that which is articulated, but can also be observed and experienced. This was important for me to take into consideration for the research, because people with speech and hearing impairments employ different ways of communicating other than speech.

I decided to do a participatory photography project with the young people. Participatory photography is defined by Kong et al (2015) as a form of photo elicitation whereby the participants generate their own photographs and are themselves “involved in analyzing their narratives and in determining what conclusions to report” (p.214). In participatory photography, “people use cameras to represent their experiences and perspectives on a given topic such as community strengths and problems” (Prins 2010). Participatory photography has become a popular method for professionals and researchers, especially when working with marginalised groups, among youth school attendees in the USA and Haiti (Zenkov et al 2014), for example, and livestock farmers in South Africa (Kong et al 2015). Participatory research techniques are “contingent on authentic participation” with a full discussion of one’s intentions and explanations behind that which they have produced (McTaggart 1989). I felt that photography was appropriate in this case, because I thought the use of a camera would provide the young people with speech and hearing impairments with a more direct method of communication in a medium other than language.

The four participants are: Sawaneh Kamara (age 18), Ramatu Kamara (age 18), Foday Mattia (age 26) and Mariama Jalloh (age 27). One Family People supports them financially when they are in urgent need. The office serves as a location for them to gather socially, which they do on a regular basis after school. They all came to know each other through the organisation and have become very close friends.

Young people with speech and hearing impairments sit at an intersection of exclusion on the basis of their age and their disability. In Sierra Leone, positions of leadership are typically reserved for elders, meaning that young people are often left out of decision-making processes. This is also notable in the disability movement, which Callus and Farrugia (2016) claim is characteristically an adult’s movement that focuses on adult voices at the exclusion of those of children and young people.

“Disability” is a heterogeneous phenomenon encompassing many different conditions and experiences. For young people with speech and hearing impairments, the unique nature of their disability is another marginalising feature, because their needs and their experiences are quite distinct from those of people with other forms of impairment.

One Family People is one of very few organisations in Freetown that make a consistent effort to include and support young people with speech and hearing impairments. The two managerial staff learned sign language so they can communicate with them, they ensure there is a sign language interpreter in attendance at every event to translate for them, they employ a trainer who teaches dance lessons once a week, and the young people are backing dancers in the organisation’s musical group.

However, whilst the young people enjoy the dance classes and performing in the musical group, there was a sense from our discussions that they feel like their participation can be somewhat tokenistic. In our focus group, they told me that I was the first white person to ever engage them in a discussion. They explained that whenever foreigners visit the organisation, they normally have a meeting with the director in his office, then the director asks the group to perform a dance for them, and afterwards the visitor leaves. This limits the opportunity to engage in discussion and runs the risk that the young people’s role in the organisation is reduced to one of spectacle.

During my time with the NGO, I observed that, often, the full participation of the young people with speech and hearing impairments was inhibited mostly due to practical reasons more than anything else. Even when the NGO makes concerted efforts to include them, this is not always easy because their mode of communication is different to others around them. At one particular event with an audience of around 50, for example, all the attendees were invited to sit in small groups and intermittently move to join different groups to encourage everyone to share ideas. For the four young people with speech and hearing impairments however, they could not all move around because there was only one translator present, so they all needed to sit together. This meant they could not fully mix with the rest of the participants.

The sense of separation between them and mainstream society is often through choice, as well as feasibility. As is quite common within the speech and hearing impaired community across the world, these young people prefer to socialise in circles with other people with whom they can reciprocally communicate in the same way. When I asked the group if inclusion is their main goal, they all replied strongly with a “No”. This indicates that the goal of inclusion, which categorises much of the lobbying efforts by groups of people with physical disabilities, is not always shared by people with speech and hearing impairments.

I wrote down the following three questions on a piece of paper in thick black pen: “What is it like to be a young person in Sierra Leone? What do you enjoy? What are the challenges?”. I explained to the group that I wanted them to take photographs in response to these questions, and that I would lend them the camera to use for two days each, and after ten days we would meet again to discuss the photographs they had taken as a group. I wrote down the names of each participant in order from one to four, and explained that each person would use the camera for two days, and then they would then meet with the next person to hand over the camera for their turn. Saweneh was first on the list, so I handed the camera to him to use first. I took a photo of the questions so they could refer back to these questions on the camera roll in case they needed a reminder, and I also took a photo of the list of names so they could remember the order of names. I asked them to elicit a maximum of 20 photos each; they could take as many as they wished, but they needed to delete ones they did not like so they were left with a maximum of 20. I also showed them the main features of the camera so they knew how to use it. We arranged a time to meet ten days later, when they had all taken their photographs. On that day, we re-grouped with the interpreter present, and the photographers took turns to each go through their photographs and discuss their ideas and intentions behind each image.

The objectives of the project were threefold:

To include the young people with speech and hearing impairments in my research, as they are often excluded, and to treat them less as passive subjects of research and more as social actors or “co-creators” of knowledge in a participatory process that explores their lives.

Go to next chapter >>