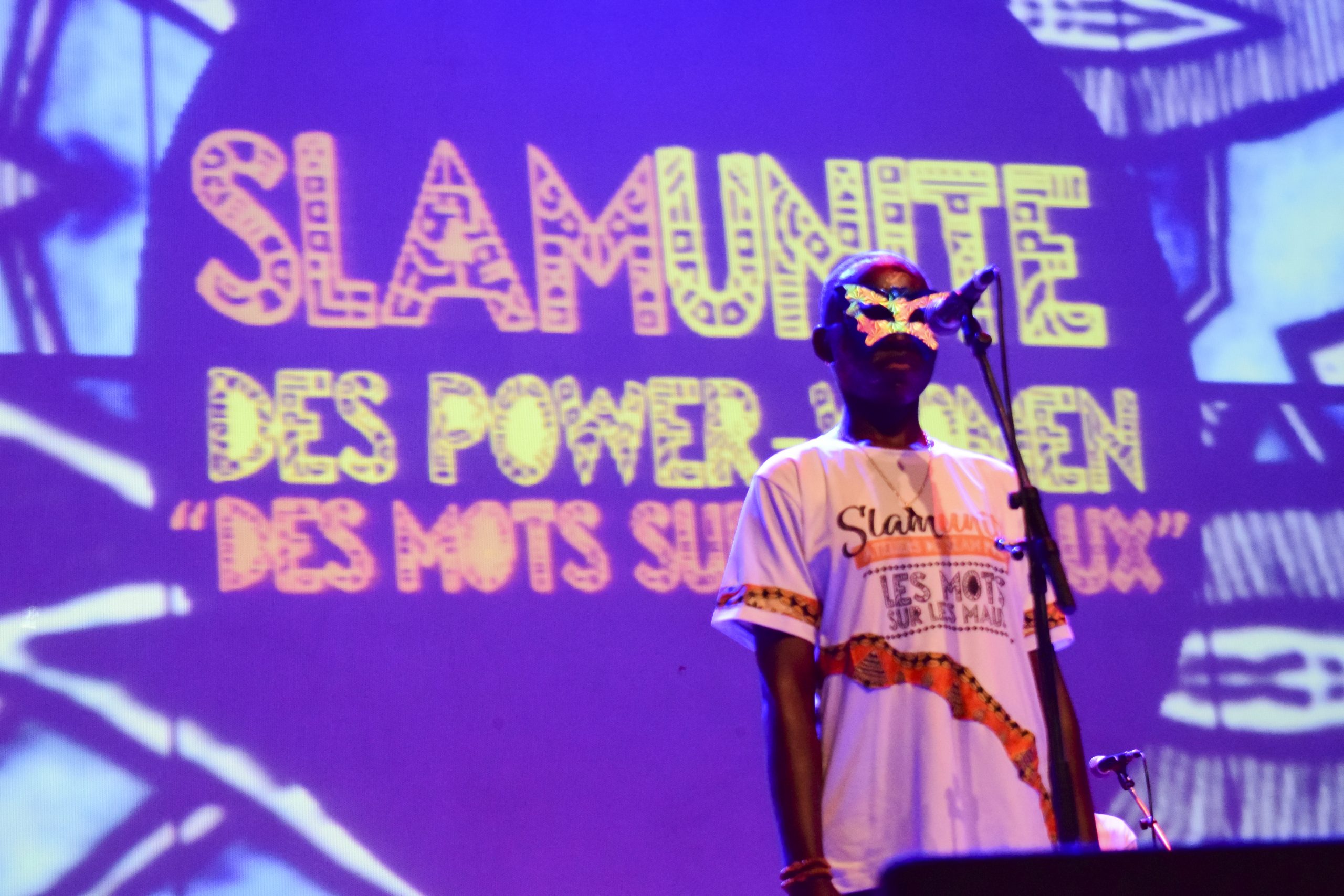 I am Mariusca Moukengue, a Congolese artist in my late twenties. In 2018 I have initiated a slam project called Slamunité (Slamunity) that aims to help young people, and especially women, recover from violence experiences. As the concept indicates, Slamunity is the artistic expression of slam which advocates unity. Through my art, I am closer to vulnerable children, to children abandoned to the street and those who are not in school. I am well aware of the function of art as therapy in society, as I myself experienced the effect of the healing virtues that slam has offered me for my wounds of life.

Slamunity was first an idea of an artistic adventure around the oral tradition in my country before it became pan-African, and wanted to promote slam in conflict environments through workshops, meetings and shows. I am very concerned about children’s social environment because I myself have lived in an one where children did not necessarily have a voice. And often when they are victims of violence or aggression they are forced to remain silent for fear of being singled out. Thanks to the support of the European Union and the l’Institut Français of Congo I was able to introduce young girls who are victims of sexual violence to slam in 2018 and 2019 in the Congolese captial Brazzaville. This has been a way for me not only to allow these young girls to come out of their silence but also to give them the opportunity to make a living from this art. With the programs ‘Slamunity power of the women’ and ‘Slamunity Girls’ we have been able, on the one hand, to teach the young girls about slam, and on the other, to give this vulnerable group the opportunity to rediscover the joy of living in a harsh environment.

Slamunity is an innovative concept, a new experience of a very enriching artistic life. We give a voice to young people who have remained silent for too long. Making room for a voice for a youth enlightened about its future. This is the core of my and my team’s commitment to this project. Without my team I cannot do this; a single finger cannot clean a whole face.

We work with the cultural magazine Africulturelle.com based in Senegal, which has been with us since the1st edition, Zhu Culture, Les Courageux Kouloutch and Cleo Konongo, as well as Mbongui Art Photo directed by Zed Lebon Chansard.

Moreover, the Slamunity project has a pan-African vocation, in the sense that it aims to go where it is needed to speak slam and that we go beyond continental borders. Foumban in Cameroon, Lubumbashi in DRC, Dolisie and Brazzaville in Congo have already benefited from this project. I am well aware that the challenges are enormous, but above my head, the sky is so infinite. We need to popularize slam with the young people and ensure that this art can also contribute to the growth of them and challenge the collective conscience on development issues. We are currently working on the next edition of Slamunité with the Réseau des Intervenants sur le Phénomène des Enfants en Rupture (REIPER) in Congo, for the end of October 2020. The trainings are divided into two phases: a theoretical phase and a practical phase which leads into a show.

Themes we address in our workshops are: vViolence, tolerance, aggression, public speaking, personal development, and youth entrepreneurship. However, for this edition we will focus on the issue of the protection of the rights of the child. I remain hopeful that little by little the march will be less painful. Like a child, my team and I are convinced that the slam has a better tomorrow.