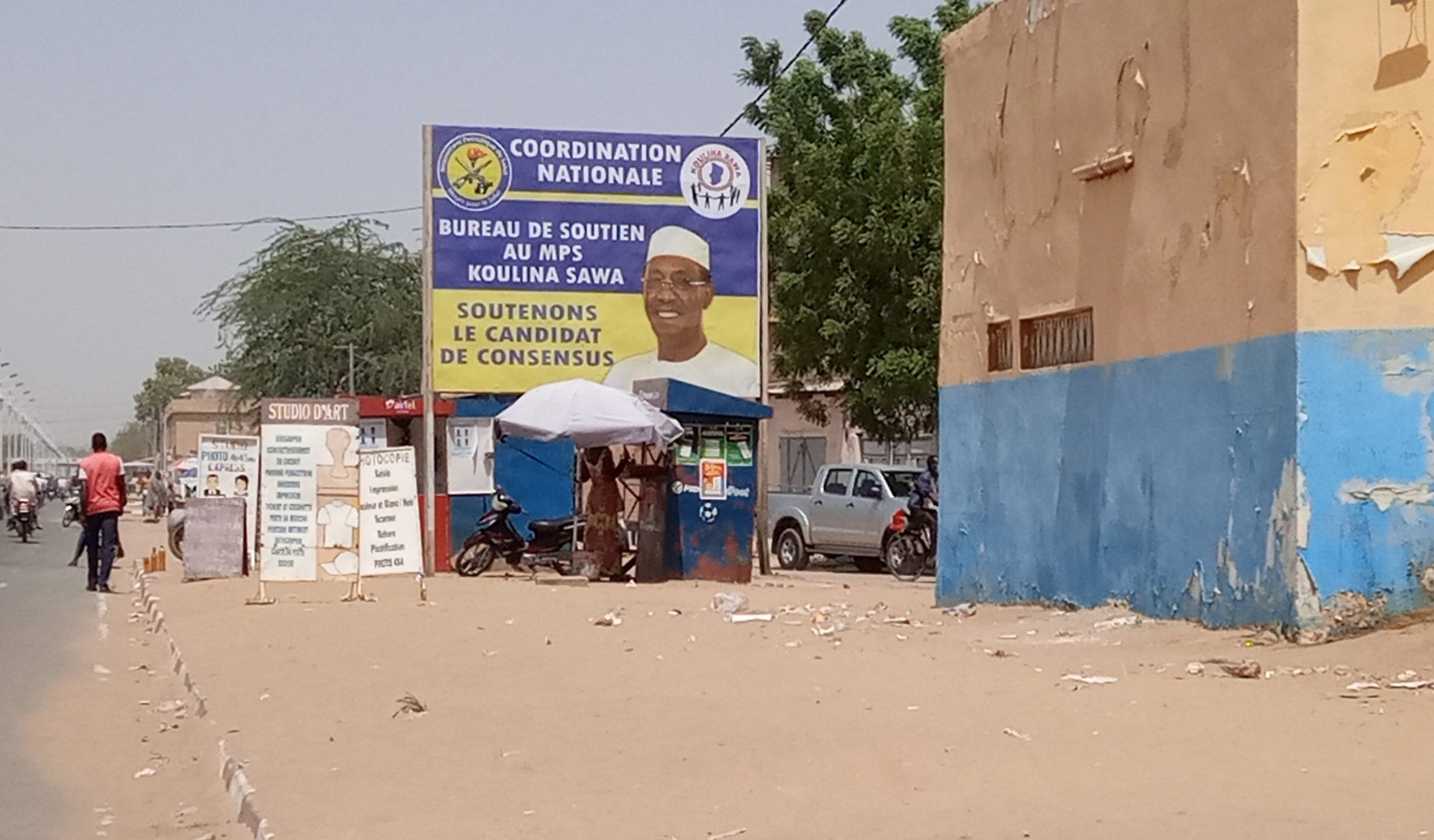 On 11 April Chadians will go to the polls for the presidential elections. Although the campaigning began in earnest about a fortnight ago, it is only the outgoing president Idriss Deby who is visible and campaigning ‘against himself’. Those who accompany him (the opposition) are conspicuous by their absence on the ground. In the meantime, Chad lives at the rhythm of social discontent, with demonstrations every week.

The Chadian president who has been in power for 31 years is campaigning against himself. The absence of important figures such as Saleh Kebzabo, Laoukein Medard, Ngarledji Yorongar, Masra Succès, Yaya Dillo and Baba Ladé, dismissed by the CENI or boycotted by the others, gives Idriss Deby an election without worry. Campaigning in N’Djamena first and in other cities of Chad, Idriss Déby does not dwell on the results of his 30 years in power in a country where all indicators are in the red. But the man makes promises and still holds the speech on “living together”, “security” … his favorite themes. For many observers this presidential election of April 2021 has no surprise, Idriss Deby has no serious candidate in front of him. In N’Djamena, in every nook and corner of the city, it is the Marshal of Chad who floods the city with effigies on large billboards, banners, and gadgets of all qualities. The same is true in the eastern, western, northern, and southern regions of Chad. On social networks, Idriss Deby Itno still reigns supreme. Several pages dedicated to his cause are created and sponsored by the militants of the Mps (his party). Idriss Deby is heading for his 6th term in office after 31 years at the helm of Chad (as a reminder).

The political news of the last few weeks is also marked by the meeting of Masra Succès, the one who is in the eyes of all Chadians a fierce opponent of Idriss Deby Itno, with the Chadian president on March 16, 2021 at the latter’s private residence. “We went to talk openly about the transition to a new Chad, through dialogue between everybody, before the next elections, which in our opinion must be postponed. And we are coming back to the people and all the active forces to pool these proposals and make them available to everyone,” explains Masra Succès. “No taboo subject. Chad must inevitably move towards transition because all the foundations of the nation are down now. See you at the press conference to talk about it in detail. And citizens, send us your written proposals,” he wrote on his Facebook page after the meeting with President Deby.

“Geniuses make mistakes, often very fatal,” wrote one internet user. For many, this meeting is inappropriate. This is not the time to meet with Idriss Deby Itno, who refuses to recognise the legitimacy of the movement ‘Les Transformateurs’. For many young people, Succès Masra alone embodies the hope for change, but in Chad, no opposition or civil society leader has met with Idriss Deby and is believed to be ‘credible’. Chadians believe that Masra made a blunder and this will remain in the annals of history for a long time. Some felt ‘betrayed’ by Masra Succès. However, there are others who think that this historic meeting is an important step for Chad. One thing is certain, if there is to be a winner at this meeting, it will not be Masra Succès.

A 6th mandate too many, according to the street

At the same time in the streets of N’Djamena, anger is rumbling. The 6th mandate of the Chadian president is considered as one too many at the head of Chad, a state of nothingness. Peaceful marches have been multiplying for almost two months. A march called ‘the people’s march’, initially organised by the movement ‘Les Transformateurs’, shakes the city of N’Djamena every Saturday, followed by another march called ‘Wakite Tama’ in Chadian Arabic which translates as ‘it’s time’. ‘The time has come to an end’, initiated by civil society and opposition parties. Unemployed graduates, to whom Idriss Deby promised 2,000 jobs a few weeks ago, also demonstrate every Thursday. Every week, several leaders are arrested, as was the case with human rights defender Mahamat Nour Ibedou, Khalid Daoud, the journalist and activist Avenir de la Tchiré, Toussaint Balama, the opponent Djékonbé François and the artist N2A Téguil, not to mention many others. For the artist N2A: “Deby’s regime has already handicapped Chad, there is no question of letting him escape on crutches”, referring to the situation in Chad which does not seem to have changed for a long time. Several other people are arrested every week in Chad.

If the pressure is mounting in the Chadian capital to ‘prevent’ Deby’s 6th term, the chances of its success are minimal. “Chad is on the ground. It is a vehicle whose engine has broken down,” says opposition politician Pahimi Padacké Albert.