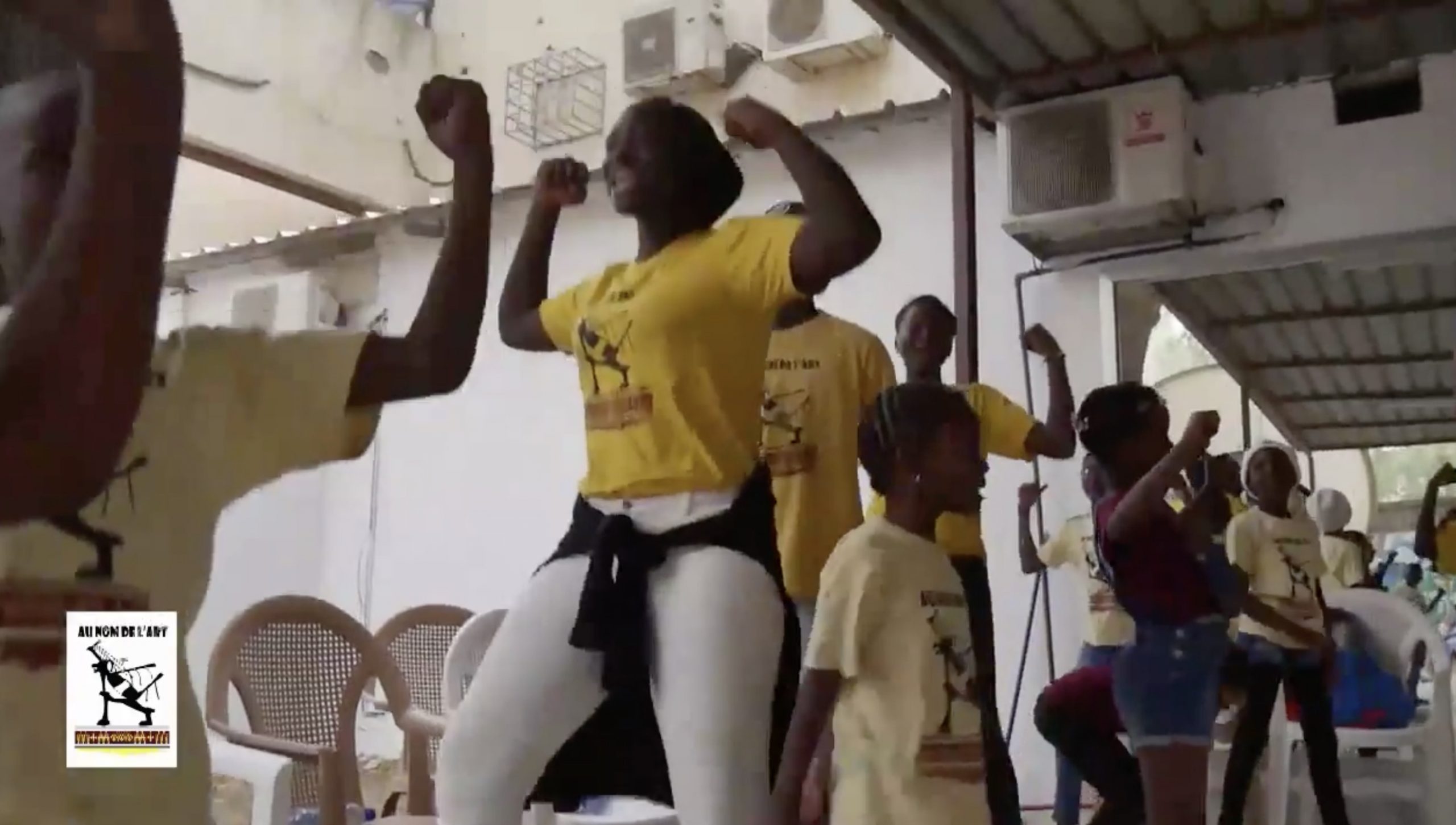 Between music and sculpture, the artist Maoundoé Célestin has built a bridge through ”Au nom de l’art” (In the name of art), a creative residency for children that began in January 2020 and will end in March with a concert for the general public.

It is a good-natured atmosphere that reigns this Saturday morning in the French Institute of N’Djamena where the village of the project ‘In the name of art’ (Au nom de l’art) is located. Children aged 8 to 15, smiling, singing and dancing to the rhythms of the Maoundoé songs we see. Innocently carefree, they let themselves be carried away by the joy that reigns around them. “Who’s talking?” says Maoundoé, “You! “the children reply in chorus. “Who’s listening? “the artist says again; “We! “the children say, to get their attention. It’s an unparalleled complicity between Maoundoé and the children.

‘In the name of art’ is first the project of a new album by the Chadian poet-singer and sculptor Maoundoé Célestin but which has taken on another dimension. “Through this project I would like to find a link between sculpture and music. But this link is not very obvious because on the one hand it’s living art and on the other hand it’s art that we exhibit. I had to be myself and that’s where things went well,” the artist tells us. “Defining the project ‘In the name of art’ in a few words becomes difficult for me,” he continues.

Every weekend, several children gather around the artist Maoundoé. The residence revolves around sculpture, music and especially joie de vivre. “For me there is no pressure to put on a child. A child by nature is fun. Bringing them closer to creation becomes fun for them. The project gives children the opportunity to imagine things in order to build their own world,” Maoundoé tells us.

Asalfo of Magic System group has accepted to be the sponsor of the 1st edition of the project ”In the name of art” stage of Chad. Chad stage because in reality the project is meant to be itinerant. In addition to the group Magic Système who will be in N’Djamena for the restitution of the residence by a concert for the general public, there will obviously be other musicians who will accompany the project.
Cultural education..

The project ”In the name of art” of Maoundoé raises the issue of cultural education in Chad. Cultural and artistic education thus fuels children’s curiosity and personal culture. It encourages children to express an aesthetic emotion. It is not a question in cultural education of necessarily preparing “the cultural man” or “the artist”.

The lack of infrastructure and policies to enable such frameworks is a serious problem. Unfortunately, there is no policy in Chad to include culture in education. However, the crop should not be an isolated area that we can enter or to which we do not have access. There are many crops and the ability to move between them is important. And so culture is essentially social. Cultural education can compensate for social inequalities, increasing the social and cultural capital of individuals, communities and entities in order to give them more awareness, skills and knowledge to act in the world of social relations. Cultural education can also strengthen other skills, support processes of searching for cultural identities, facilitate communication with other communities.