Death of Idriss Deby, legacy of abuse and uncertainty 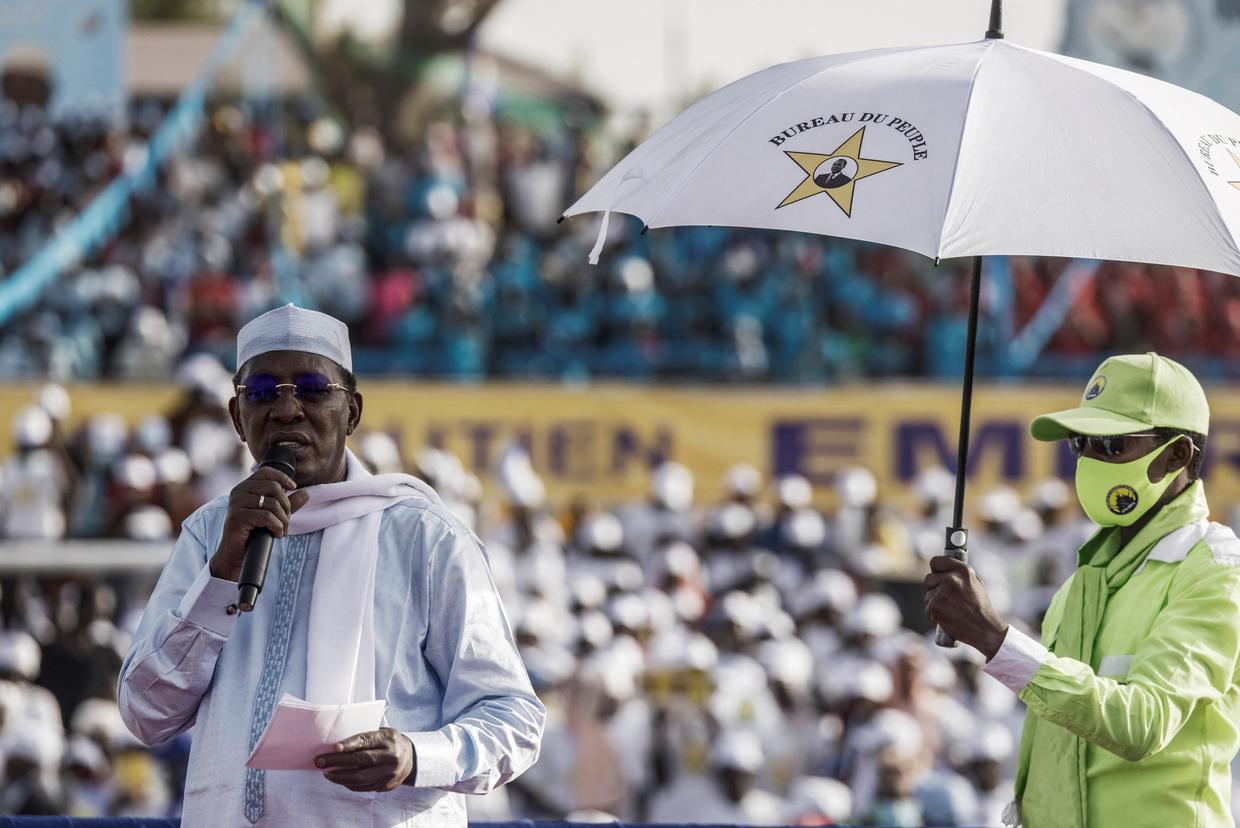 Déby gave a speech in Ndjamena during his election campaign. © AFP

The day after the announcement that president Idriss Itno Déby was re-elected, he died of wounds sustained on the battlefield in the north of the country, leaving behind a country in shock, anger, uncertainty and abuse.

Idriss Déby had just been re-elected with 79.32% of the vote for a sixth term in a climate of high violence. A mandate that was close to his heart.
A rebellion launched on election day, April 11, 2021, by elements of the Front pour l’Alternance et la Concorde au Tchad (FACT), was put down in bloodshed, resulting in the death of at least 300 people, according to the Chadian army. He died of wounds sustained in a clash with rebels near the town of Nockou in the Kanem region.

Against all odds, the Chadian population was surprised by the announcement of Idriss Déby’s death, which was made on national radio and television on Tuesday, April 20, by national army spokesman General Azem Bermandoa Agouna, surrounded by 14 other generals, the leading figures in the Chadian army. On Monday, the day before, the marshal went behind army troops at the front in Kanem. It should be remembered that Idriss Déby, as a military leader, is used to the battlefield. To mobilize his troops, the man decent from time to time on the battlefield whether against the Boko Haram or against the rebels. But this time, things did not go as planned, Idriss Déby was shot and died on the battlefield, left as he would have liked, as a war hero. In the meantime, the presence of the Chadian president behind his troops is a well-kept secret by a restricted circle; Chadians were not aware of it, and certainly the CENI as well, which had proclaimed the results while the president was already dead. It should be noted that after the announcement of Idriss Déby’s death, the shock was clear in the city of N’Djamena. Many people left their places of work to be at home with their families. The markets and some businesses are gradually emptying on Tuesday, April 20.

With the constitution suspended, a military council was established, headed by one of Déby’s sons, General Mahamat Idriss Déby Itno, also known as Mahamat Kaka, head of the presidential guard, 37 years old. However, in order to be elected to the supreme magistracy of Chad, one must be 45 years old. The son of Déby brought to the head of the country is a violation of the texts in force in the Republic of Chad. For Senegalese researcher Alioune Tine, a specialist in human rights issues in Africa: “The military who set up a Transitional Council headed by Déby’s son have carried out a coup d’état,” he said. “The consequences for democracy, human rights and the geopolitical situation in the Sahel are very serious,” he concludes. In Chad, people do not hear with their ears the question of a succession at the head of Chad, for many Chadians, “Chad is not a monarchy, let alone a kingdom. The Déby system has had its chance, it must leave the place to someone else. For Chadians, putting another Déby at the head of the country would be perpetuating the system that has failed in 30 years of rule. However, the military say they do not want to impose themselves on power. For them, a transition of 18 months will allow them to put the country back on track, a proposal that the political opposition and civil society reject in its entirety and call for “the establishment of a transition led by civilians with respect for the republican order through an inclusive dialogue.

The socio-political situation in Chad therefore remains worrying. President Déby, in 30 years in power, has not created strong institutions that can deal with these types of situations. The risk of Chad going backwards is very real, as rebel forces are at the door of N’Djamena and threaten to attack if they refuse to put a civilian in charge of the transition. If the city of N’Djamena is calm two days after Déby’s death, what will the next few days be like?