The Tradegy of the Stupid Nation, a book by Max-Landry Kassaï 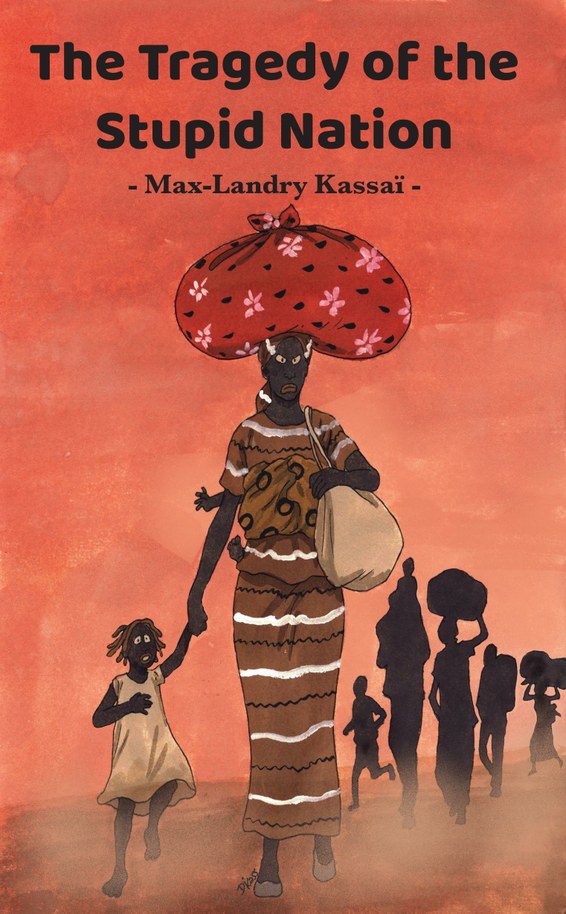 In ‘The tragedy of the stupid nation’ Max-Landry Kassaï offers different ways of understanding of what it is to come of age in the Central African Republic. He does so by combining different literary genres – prose, fiction, political analysis and opinion, report style with recommendations, blogging, poetry. Kassaï describes visceral scenes of open conflict, displacement, the loss of his parents as well as his flight from his home city Bangui to Kinshasa. His account is one of a constant movement away from memories and violent experiences, and the emotional and social damage that comes with it. On the other hand, by using fiction and prose it is also an account that deals with these experiences, giving them place in a book. ‘The tragedy of the stupid nation’ is a book of pain, violence, a lot of frustration, as experienced from inside out, but it is also a cry for hope. This is why Kassaï concludes his book with recommendations and ways out of the conflict.

At the beginning of the book, Kassaï describes how he had to flee his quartier as a young boy.

“After long periods of waiting, we had to pass through the roadblocks. And then we finally arrived in the 4th arrondissement. A completely different atmosphere reigned there. Its inhabitants, a priori, did not seem to be joyful about our arrival. Hatred and anger could be read in their eyes. They were hostile to this mass of displaced persons. We began to receive insults from all sides. The residents treated us like a bunch of cockroaches, murderers, and traitors. We had stones thrown at us and people spat into our faces. We were not accepted by these residents, who labelled us ‘rebels’.
(..)
Night fell. The makeshift camp was covered in darkness. A few lamps and candles glowed in the middle of a gloomy atmosphere. A great silence reigned there, and no one could afford the luxury of going out of the camp. Under my sheet, I meditated on our fate and asked myself why there was so much hatred and division among us Central Africans—we who were in fact a single people.”

Kassaï’s writing is open and honest. Many passages describe the violence in a level of detail which some would rather omit. They are not easy to read. And yet, these are the raw parts of Max’ and many other lived realities.

As an adult, Max stayed in the Mole refugee camp in the northwestern DRC for a couple of months.

“When I arrived in Congo, I heaved a great sigh of relief, because I was far from the sound of guns, the tears, the bloodshed. I gradually came back to myself. I began to think about why we were in this crisis. In the end, I concluded that it was no less than stupidity.
My first nights in Congo were nightmarish and difficult. I continuously reviewed the acts of crime committed, those from which my friends had died. And, to be honest, the night-time frightened me very much. Around me, there was the sound of the other refugees, who also carried with them the heavy pain and suffering of the stupid crisis. The stories of others could be more terrible than mine, those whose close relatives were massacred in front of their eyes.
It was difficult for us to turn the page on this story in order to think about the future. The refugee camp at Orobé had a forlorn atmosphere. Only the children were indifferent, and they adapted to this new life in spite of themselves—a life so different from the one we had spent in our home country.
(..)
In the mornings, it was difficult to bear the coolness of the Oubangui River, which was situated a few metres from the camp. We would wash there in the river at noon or in the afternoons. We also had to accept the food that UNHCR served us, defrosted and inedible dishes, fundamentally coarse. This made us sick, and some people, especially children, suffered from it with attacks of acute diarrhoea.
(..)
Our activities consisted of eating, sleeping, and holding banal discussions—not to mention sex, which some refugees were so fond of as a way of passing the time. So our time was occupied with these banal things in order to escape our suffering. In addition, there were the striking stories of our experiences.”

The chapters are interspersed with a number of poems. The poem ‘The cry of hope’, written by Ephraïm Tote, Max’s comrade-in-arms, reveals the hope for ‘peace’, the healing from the pain, love and forgiveness, that fights against the ‘war’, the weapons, the violence, the suffering.

Listen to the full poem ‘The cry of hope’ (in French), recited by Max and Ephraïm, on the 4th of June 2014 at Kinshasa (quartier Kingabwa).

This is the compound where Max used to live, in Kinshasa.

The book is a result of the crossing paths of Max-Landry Kassaï and Catherina Wilson, the editor of the book. Max and Catherina met in Kinshasa in May 2014. At the time, Max had already been living in the Congolese capital as a refugee for some months, and Catherina was at the beginning of her PhD trajectory. Max had previously worked as a journalist in Bangui and was now working voluntarily at Radio Elikya in Kinshasa. As ‘The tragedy of the stupid nation’ makes clear, Max was fleeing year upon year of violent experiences and memories of them. As Catherina gained more insight into the layered stories of Max’ flight, she encouraged him to start writing blogs based on texts and poems he had been creating over time. It was something Max wanted to do for a long time. These became the basis for this book.

Kassaï is the author of the manuscript, yet the physical book is the result of a collaboration, a co-creative endeavour, between Max, Catherina and others. “Above and beyond these material benefits, the most enriching result, for both sides, was the collaboration (and perhaps even co-creation) that grew out of it: the ideas that were exchanged, the moral support, the advice, the lessons learned. My role in relation to Max continuously changed: I started off as a researcher, but then became a facilitator, connecting people, and even a first-hand editor. Max, at first an informant, turned into a blogger, a guide, and a writer. We became friends,” Catherina writes in her note.

The collaboration extends beyond the exchanges between Max and Catherina. It is a multi-disciplinary effort that includes artistic, journalistic and academic facets. he collaboration also includes, directly and indirectly, the research project’s team members of ‘Being Young in Times of Duress’ (which funded Max’s initial blogs), the CAR cartoonist Didier Kassai (who drew the front cover), the CAR journalist Pacôme Pabandji (who wrote the foreword), and the translators of the book. And most important, all the people who Max has met during his journeys and have inspired him to write down his experiences as a refugee.

“A must read for everybody who is concerned with the effects of war on society. For readers wanting to understand the social and emotional damage done to ordinary people by these crazy wars fought by ‘madmen’ everywhere in the world.”
Mirjam de Bruijn, Professor of Contemporary History and Anthropology of Africa, University of Leiden, The Netherlands

‘The tragedy of the stupid nation’ can be ordered here.