Gender-based violence in Mali: Breaking the silence, appealing to the authorities 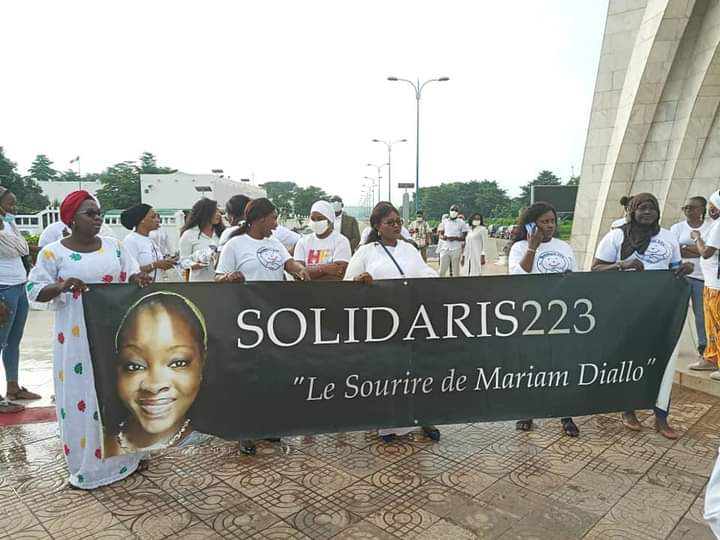 In Mali, the Alliance Against Gender-Based Violence a coalition was formed which organised a large peaceful march on Saturday 26 September, bringing together thousands of men and women to support all victims of violence of all kinds in Mali, but also to alert national and international bodies in this area and to influence the authorities to adopt the draft law that is still dragging on being read and reviewed since 2017.

Cases of violence against women are very frequent in Mali. In recent years, there has been a sharp rise in violence against women, many of whose victims have not survived. Acts that outrage an entire people. Among them, the murder of Mariam Diallo in 2015, a victim of domestic violence in Bamako, was stabbed several times by her husband before giving up the ghost, or in 2019, Kadia Kanté, whose throat was slit by her husband who then tried to commit suicide afterwards. But the trigger was with the case of Mariam Sow Alias Mamacita, raped and sequestered by her companion for 7 years. A story that has aroused strong reactions and outraged a whole nation, and even beyond, for the past few days, especially since the supposed companion is an internationally renowned artist. These crimes too many, the latest of which has alerted women’s rights organisations and associations, including Foundation Hera, Solidaris223, Justice and Dignity for the Women Of Sahel, as well as experienced human and women’s rights activists and defenders, to react to demand the adoption of the draft law on the prevention, repression and management of gender-based violence in Mali.

The latter cases have received more media attention, but how many cases are going on in silence? According to the 2018 demographic and health survey published in 2019 by the Instat[1]in Mali, 45% of women aged 15 to 49 have suffered acts of physical or sexual violence and half of the women aged 15 to 49 in union or breaking up a union have at any given time suffered emotional, physical and/or sexual violence at a rate of 49%. Of these cases of violence, more than half have never told anyone about it or sought help for fear of reprisals or stigmatisation, or because of a lack of access to and availability of services, including the costs of legal proceedings, or simply because of family values. In addition, according to the Gender-Based Violence Information Management System (GBVIMS), 1199 cases of GBV were recorded, only for the first quarter of 2020, most of which are reportedly cases of violence (physical and sexual).

The surveys conducted by Voice4Thought Academy in Bankass, Bougouni, Douentza and Macina are not very explicit about violence against women. The reason is simple, how to ask the question? A subject that is still taboo in several of our areas of intervention. But in the interviews with women leaders the subject is mentioned, it is also certain that in these conflict zones, many women are victims of domestic violence and other types of violence which are also weapons of war. The reports[2]on the subject exist for the centre and north of Mali. I am asking the V4TA research teams to integrate the gender approach into their surveys as it can provide interesting information on the issue that can help alert the authorities.

In Mali, the socio-cultural context means that GBV is widespread. It is not only a question of war and/or violence, in Mali violence has become the daily life of many married women. The family in Mali, like everywhere else in the world, is the first important social environment. The family is the pillar of societies and is very important in Mali. Any link or pact in society is generally made on this basis. And family values are often put forward to maintain the link and preserve the family. In most families, the female spouse does not often have the right and/or the audacity to complain about the (violent) behaviour of her husband, since he has married her and would have all the rights over her. The Alliance against GBV

Indeed, the Malian jurisdiction does not provide for any law against domestic violence or other forms of violence against women, but in criminal law rape and physical assault are punishable. In addition to the penal code, the Malian constitution guarantees the protection of women’s rights. However, the results are not there, as Mali’s statistics show, despite the many challenges to ending these human abuses.

Call for the effective adoption of a law

The Convention on the Elimination of All Forms of Discrimination against Women (CEDAW) defines GBV as “any act of gender-based violence that results in, or is likely to result in, physical or psychological harm or suffering to women, including threats of such acts, coercion or arbitrary deprivation of liberty, whether occurring in public or private life”. Gender-based violence against women is recognised worldwide as a violation of fundamental human rights. A growing body of research has highlighted the health, intergenerational and demographic consequences of this type of violence. Gender-based violence is one of the most widespread violations of human rights. Although violence against women is not a new social fact, the interest in this issue is a fact that has marked our times and especially the last decades. Nowadays, the struggles being waged to try to combat and eradicate the phenomenon are very important. The adoption of a law remains the primary concern of women’s rights activists and organisations. The Alliance against GBV

The march on 26 September showed that Malian citizens are tired of the situation. Between slogans and interpellations, the march left its mark on more than one nation: “Stop we’re fed up”, “Love is not killing or mistreating”, “I refuse to be brutalized”, “State authorities we are looking at you”, “I want my law for my defence”. In the current case of violence, including the case of Mariam SOW, her lawyer who is defending her says she is very confident and is ready to go all the way to ensure that justice is done.
1] National Institute of Statistics (INSTAT), Planning and Statistics Unit for the Health, Social Development and Family Promotion Sector (CPS/SS-DS-PF), The DHS Program ICF August 2019.

[2] Reports: International Federation for Human Rights FDHI, Report on the situation of women in Mali, 34th session of the Committee on the Elimination of Discrimination against Women 2006. Nabila Hamza Gender Expert: National Network of Centres for Listening to Women Victims of Violence. Gender-based violence. Training manual for female listeners of the Anaruz network. Nov. 2006/ Newsletter of the Gender-Based Violence Sub-Cluster With technical support from UNFPA January to March 2017/ OCHA: Humanitarian Programme Cycle 2020 published in January 2020.