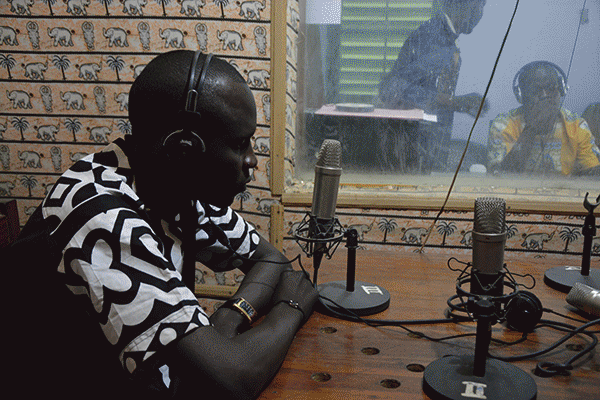 Inspired by political events and everyday life, Croquemort’s songs deal with socio-political themes from both a personal and collective perspective. His texts refer to the daily life of Chadians, a life that is recognizable in other African countries and, of course, elsewhere in the world.

The way the government treats its citizens—in fact, the government acts in such a way that citizenship is an offense in itself ( On this, see de Bruijn & van dijk 2007, and also to de Bruijn & Djindil 2009. See also the opinions on the website Yadari from Abel Maina) —is also a topic of his songs. The songs all refer to the impossibility of being a person, of being a free person, living in a prison that sometimes we make ourselves (e.g. the song Prisonnier). Permanently caged and imprisoned in one’s body, the real nature of a human being is sometimes too hidden, too complicated to understand (Apprenons à les comprendre).

Croquemort’s music and words are witnesses to real life in N’Djaména, and with a burning passion they tell the story of the city. The song Dans mon quartier speaks about the dreams and disappointments of growing up in Chad, while La renaissance is a sharp critique of the evictions that displaced many families during the process of renovation of N’Djaména in the late 2000s.

Through his songs, Croquemort reaches the youth en colère (the angry youth), the adults who are disappointed and at the same time disappoint the youth by their non-action, the policy makers and governors of the country … but always with reference to his personal experiences and his many faces: Croquemort the rebel, the protester, the man of justice—and also the man en colère, ready to fight, but in a civilized manner. As a philosopher, he is always dreaming of a better world, even if it is just an ideal that may never come true (Les cieux ont brulé).

>> Read about justice and injustice in music

>> Context: read about the financial crisis and the youth protests in Chad

Did you know that in 1960 the Democratic Republic of Congo had the same level of development as Canada? Today, the one is in the PPTE, the other is in the G8. Look where dictatorship leads us. [PPTE: L’initiative pays pauvres très endettés, in English Heavily Indebted Poor Countries (HIPC)]