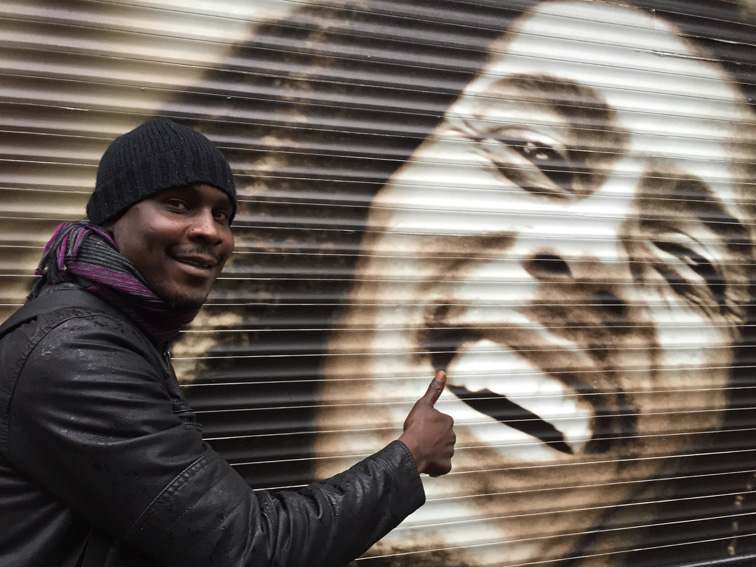 Didier and Croquemort have a deep feeling for justice, in contrast to injustice—and especially to a particular aspect of injustice: betrayal (trahison).

Trahison is a word that comes up regularly in our discussions. In a society where daily life has to deal with oppression and constant uncertainty, basic trust relations are difficult to develop (Debos 2013, Heitz 2014).

This deeply rooted aspect of Chadian society was already implanted in Didier during his early youth: he was six years old in 1990 when the Habré regime came to an end. A long history of crisis has shaped the country. Coercion, endurance, and an internalized sense of impossibility—for Croquemort, these are the conditions that contribute to the permanent feelings of mistrust and possible betrayal that are a constant in Chadian society.

When you are facing an oppressor, the struggle is not easy, but it is at least balanced. But it is when even the oppressed turns against you that you are really in danger. The bullets that come from your camp are more difficult to block because they hit you in your back or your side, while your shield is in front of you, facing the one that you thought was your real enemy. Doubt insinuates itself inside you, and every day when you wake up you wonder on which front you have to fight. Do you have to leave everything behind, to accept enduring the profound silence of fatalism? I would like you to hold flowers and say that life is rosy, but nature makes you collect them with a bleeding heart. You are scared. There is only one word that can describe what I am currently living: DISCOURAGEMENT. One day history will decide to talk, and it will not be amnesic…

But under such conditions, some people take action. Didier’s youth in Chagoua was a confrontation with Chad’s misery and poverty, but it was also with a country of strong men and women, people who lived that misery and made something out of it. It is this confrontation that made him a protest singer and inspired him to denounce the way the political situation has killed the possibilities of the youth to live an untroubled life and believe in a reliable future.

On the contrary, betrayal is perceived as always being just around the corner and was present in Didier’s personal experience as a specific event during his fifth year of studies in medicine, an event that left a deep scar on him. For Didier, betrayal is the reason why he had to study for nine years to get his degree in medicine, having being expelled for two years from university for participating in a protest with his co-students.

When a doctor was accused of having made a wrong decision, believing that it was not really wrong, Didier protested with some other students. This eventually transformed into a huge protest, and finally Didier and some of his fellow students were accused of leading the protest. Accused of treason and of conspiring against the leaders of the country, he was expelled from university with 30 other students. The non-support of the majority of his fellow students is a memory that still rankles today. He could return to his studies only after those expelled won a legal case against the university. After graduating, he commented on it on Facebook: it is simply impossible to forget injustice and the lack of show of solidarity from his fellow students.

However, the two years outside university were also an opportunity, as they allowed Croquemort the slammer to blossom. The artist in Didier had a chance to develop, and he invested much time and energy in his career during the period he was banned from the university. It was after one of his songs (Je voudrais devenir star) was played on RFI (Radio France International) that his name became known. These experiences, and the anger and determination that arose from them, made him reflect on the possibilities of youth to have a bright future and to seize their opportunities in full.

During these years, Didier finally completed the transition to becoming a protest singer, opening a completely different phase in his experience as an artist and possibly changing his point of view on his medicine studies.

These reflections were visible when, after finally being re-admitted to university, he completed his studies. On the day of his graduation ceremony, he performed a slam piece about his doubts and inner contradictions about which path to follow from that moment on. Being a slam artist and a medical doctor, what field was he supposed to pursue? Protest music or medicine? Micro ou bistouri? (‘microphone or scalpel?’).

Still hesitating to become a doctor and employed by the state, Didier is undecided over his vocation as a doctor, an entrepreneur, and a musician. Is it because after all he does not really want to serve the Chadian state? Or perhaps he should become a member of the state machine and get his part of the oil money? Today, due to the malversations of the elites, Chad has no money … an ever-frustrating situation that seems very difficult to change. These frustrations are experienced every day in Chad, and are now mixed with discussions about the threat from Boko Haram. There is an awareness that in this new period in world history, colonial divisions are coming ever more to the fore again—as is the arrogance of the Western world, be it a conscious attitude or not. All these reflections clearly inform the colère of a young man like Croquemort/Didier Lalaye.